These closed headphones keep outside noise out, and seal in what you’re listening to 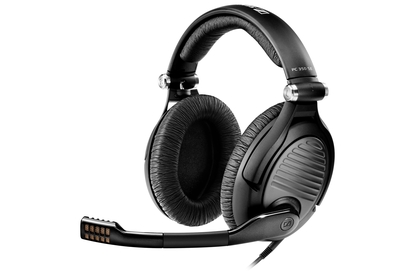 Sennheiser’s revamped PC 350 SE headset is a portable gaming headset that is compact, but doesn’t make significant sacrifices in sound quality or isolation.

If you’re an avid PC gamer, odds are you’ve spent a lot of money on your computer. Gaming keyboards and mice are another area that attracts significant investment, especially with the range of mechanical keyboards that are quickly becoming popular.

Sound is one of those aspects that isn’t usually given as much attention, though — to shell out some serious coin on a new set of headphones, you’ve got to be able to justify the end results. Sennheiser’s PC 350 Special Edition gaming headset is a new model that is aimed a very specific market, with features that should interest any enthusiastic gamer.

The Sennheiser PC 350 SE headphones are largely built along the same lines as the PC 363D that they’re launching alongside at CES 2013 in January. Thick ABS plastic is the main construction material, with over-the-ear ear-cups and well-padded foam surrounds.

The telescoping headband can change from short to long, and the headphones’ hinges press securely against the wearer’s head. The fabric-wrapped cord is 3m long, and terminates in two 3.5mm plugs for headphone and microphone input on your PC.

The foam is quite firm, though, and the leatherette finish on the ear-pads and head-band does a good job of sealing against your head during wear. These headphones have a tight fit and strong clamping force — combined with the closed-back design, this does a great job of keeping out a lot of environmental noise.

These headphones tend to get a little warm after you’ve worn them for a protracted period, as a result of the leatherette finish. A few minutes with them off is all you need to recover, but a short break every few hours is required or the headphones can become tiring to wear.

The same swing-down boom microphone as the PC 363D also appears on the PC 350 SE. It’s definitely one of the better integrated microphones we’ve seen on a pair of headphones, and its quality construction is evident in the clear recording and wide frequency range we captured with it. We do wish the microphone was removable, though — this would make the PC 350 SE a viable candidate for wearing on your daily commute as well as around the office.

The portability of these headphones is an aspect that Sennheiser has clearly spent some time concentrating on. They’re shipped with a hard, fabric-covered carry case, and the headphones themselves have collapsible hinges at the end of the headband to let them fold up and swivel flat to fit inside.

Even the head-band’s telescoping adjustment clicks out in very measured, precise increments — so it’s easy to close them up to stash them away, then find the most comfortable position right after you’ve unpacked them.

The Sennheiser PC 350 SE needs to hit a particularly fine compromise between closed headphone, portable headphone, and gaming headphone. This is a difficult task, but we think it’s pulled off reasonably well.

After around 50 hours of burn-in time at moderate volume, we listened to music and played a variety of games to test out the PC 350 SE’s sound quality.

The PC 350 SE performs well across bass-to-treble frequencies, sounding detailed in both high-end and low-end ranges without any particular emphasis on either. If you’re equally concerned with keeping your music sounding accurate as well as hearing enemy footsteps in your favourite first-person shooter, these headphones are a solid choice. Bass isn’t excessively powerful, but packs enough power to not be conspicuously absent.

Since Sennheiser doesn’t bundle the same 3D G4ME1 USB adapter with the PC 350 SE as it does with the PC 363D, there’s no way to add any extra spatialisation to your gaming or music. As a strictly stereo headphone, this particular Sennheiser headset does a good job — it’s got good audio separation between left and right channels for a closed-back pair of headphones, which generally sacrifice the wide soundstage of open models in order to keep audio from leaking out and annoying anyone in your vicinity.

Being a closed design, if you’re listening to the PC 350 Special Edition directly against the PC 363D or its PC 360 G4ME predecessor, you will notice that there’s not quite as much detail in mid-range frequencies, and that the sound is generally a little more closed-in. The difference is minor, though.

If you’re wearing them without any audio playing, these headphones block out a significant proportion of outside noise. They’re not in the same league as active noise-cancelling headphones or in-ear monitor canalphones, but they do a decent job. They’re not sealed enough to keep the noise of a busy office out entirely.

Where the PC 350 SE clearly appeals is in the isolation of whatever audio is playing from whoever is around you. Even with the volume at painfully loud levels, anyone within a metre of the wearer of the PC 350 SE headset will only hear a faint trace of leaked audio, and at distances beyond that it’s nearly impossible to listen in, especially if you’re in a room with the ambient noise levels of an office or LAN event.

The PC 350 SE definitely doesn’t sound bad by any stretch — we’d just audition them against the PC 363D to decide which is better for you. If you’re working or gaming in proximity to other people, the comfort of knowing that you’re not disturbing them, no matter how loud your music is, is valuable.

Sennheiser’s original PC 350 headphones were a solid choice for gamers, and this trend thankfully continues with the PC 350 Special Edition. We wish the microphone was removable, and the ear-pads’ leather finish can get a bit clammy. The lack of a bundled USB surround sound adapter is also a slight disappointment. For simple, stereo gaming with a portable flavour, the PC 350 SE makes a convincing argument.