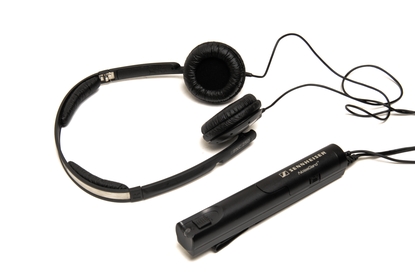 A typically high quality product from Sennheiser, the PXC250 headphones offer a good alternative to products from Bose if you're looking for something a little cheaper. The audio quality is impressive although it doesn't quite beat what's produced by some top tier IEM manufacturers.

The noise-cancelling headphone market has really been heating up lately, with a slew of companies releasing over-the-ear or in-ear headphones with frequent travellers in mind. Sennheiser has always been at the forefront headphone production and so we were expecting good things from the company's new noise-cancelling line up, the PXC series. The PXC250 sit in the middle of the range and offer a good option for those regularly on public transport or who spend more than their share of time in the air.

Audio quality is one area most noise-cancelling headphones suffer. All the processing that occurs to block out external sound obviously has an impact on your music and while this is somewhat evident on the PXC250, on the whole it sounds pretty impressive.

Sporting a typically rich Sennheiser presentation, these headphones offer a very complete sound, with nice presentation across all registers. The bass is a little slow and probably the weakest element of the music, but it still extends deeply; just a little more punch would have helped some of our faster paced music.

Treble notes were most impressive with a lot of sparkle and a vibrant, clear sound. They were very strongly emphasised, which particularly came across in some of our piano driven tunes. This may bother some users, but we found the overall balance to be pleasing. The mid range is detailed and lacks any kind of harshness. There was nice separation between all the musical elements and a reasonably impressive soundstage considering the small design.

Our main complaint with the sound is a slight lack of control and refinement. Sometimes everything comes across just a touch bloated or too strongly emphasised. It wasn't a big deal and most users probably won't notice, but audiophiles who are used to tight, clear, detailed sound will pick up on it.

Utilising Sennheiser's new NoiseGard technology, the noise cancelling on the PXC250 is fairly good, but truth be told we expected a little better. It does the job fine in an average office environment but even then it wasn't the complete absence of external noise that we're used to. Unfortunately we didn't get to test them on a flight, but on public transport they managed to dull the sound of the train rattling down the tracks without omitting it completely.

The design is fairly flimsy but will be familiar to anyone who has used Sennheiser portables in the past. They are comfortable and sit nicely on the ears, but we'd definitely recommend treating them with care as several of the joints are far from sturdy.

With folding hinges towards the top of the band and a lightweight build they would be perfect for throwing into a small bag or pocket, except for the fact that the battery pack and noise-cancelling unit is enormous. It is more than 10cm long and quite hefty, which may be a turn off for some users. Unfortunately you can't disconnect it from the rest of the headphones so you have no choice but to lug it around. The noise cancelling can be turned on or off to save battery power, but the sound quality changes a little. It flattens out a little and loses some of its richness, which some users may prefer.