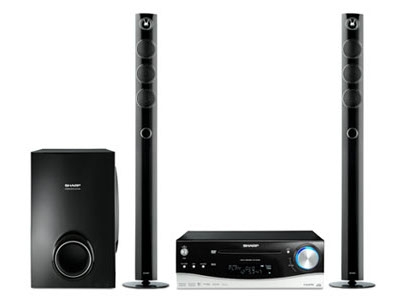 For music, TV and movie audio the Sharp HT-DV50H is good for a stereo system. Its picture quality isn’t as good as a dedicated DVD or Blu-ray player, but as an all-in-one system it would be a good accompaniment to a budget LCD television.

The Sharp HT-DV50H home theatre system packs 250W RMS of power into two thin floor-standing speakers and a squat subwoofer. With its virtual surround modes and integrated DVD player, it’s well suited to small and medium rooms that don’t have a lot of spare space.

If you want a sound boost for watching TV or movies, but don’t have space for a full 5.1-channel surround sound system, your choices are somewhat limited. Most stereo systems use satellite or bookshelf speakers, limiting their sound reproduction capabilities. Sharp’s HT-DV50H uses floor-standing speakers. While they’re quite thin, they’re significantly more capable than the satellites bundled with the JVC NX-F3 home theatre system, for example. The HT-DV50H’s 1.3m tall speakers can manage 75W each, while the significantly chunkier 8in subwoofer handles 100W.

Like the JVC NX-F3, the Sharp HT-DV50H has a receiver/amplifier with an integrated DVD player. It also has an FM tuner, a USB host port (which supports MP3, WMA and JPEG files) and a headphone jack. The receiver has single HDMI, composite, component, S-Video and SCART ports; an analog RCA and two optical digital ports are available for audio input. Oddly enough, the HDMI port only outputs in 1080i, while the SCART port’s existence at all is baffling. In its hey-day, SCART was only common in the European market; these days it has been almost entirely replaced by HDMI.

The Sharp HT-DV50H home theatre is quite simple to set up. Simply connect an HDMI cable to your TV, run the included speaker cable to the three components, plug in the power and you’re ready to go. We tested the Sharp HT-DV50H home theatre system with The Matrix and Army of Darkness on DVD. At 1080i output resolution, we found picture quality to be acceptable but too sharp for our liking. Occasionally when displaying fast motion there was image tearing; this is probably a result of the output resolution only being interlaced rather than progressive.

While video quality isn’t exceptional, audio is markedly better than a standard mini hi-fi system. Virtual surround was an area where the HT-DV50H stood out. We’re not usually fans of up-mixing and similar audio trickery, but the Sharp HT-DV50H managed to expand its sound-field without losing significant clarity or mid-range detail.

The Sharp HT-DV50H also handles music quite well. The subwoofer-floorstander combo offers plenty of bass response, while mid-range sounds are slightly recessed but still full of detail. Treble is crisp rather than warm — good for movie soundtracks and dialogue but not as suitable for music.

The Sharp HT-DV50H is a capable 2.1 channel home theatre system. It’s superior to mini hi-fi systems with small speakers, and it isn't as big as a 5.1 surround sound system.