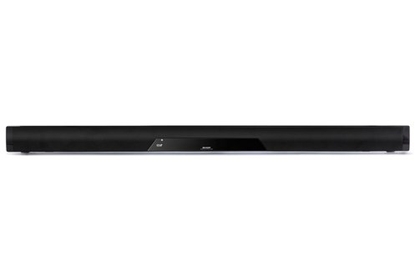 Sharp's HTSB400 soundbar provides a boost to the in-built speakers of Sharp's LCD televisions, with crisp and clear treble that makes dialogue easy to hear. It's not so great for music or movie effects, but short of buying a full-blown home theatre system, it's your best choice for getting better sound from your TV.

Sharp's HT-SB400 is a soundbar that is designed to boost the sound quality of the company's latest LCD televisions such as the Sharp LC40LB700X. With eight internal speakers in a 3.1 channel setup — two front channels, a centre channel for dialogue and extra 'subwoofer' speakers to boost mid-range response — it provides crisp and clear audio that is well suited to television and movie dialogue. It is more competent than most television's internal speakers when it comes to music as well, although bass response is lacking. If you don't have the space for a larger home theatre system, this is an easy way to give your television an increase in volume and audio quality.

Like Sharp's 2009 LCD televisions, the HT-SB400 has a glossy black theme. It can be used with any LCD television, but we think it would look best paired with a Sharp LCD. It is slightly wider than a standard 40in LCD or plasma television. The touch-sensitive front panel (just touch it to turn the system on) has a near-mirror sheen to it, but status lights and buttons can still be easily seen. Along with a power input, the rear of the soundbar has two analog audio inputs — a stereo RCA connector and a 3.5mm stereo jack — and an analog RCA pre-out for connecting an external subwoofer. No digital inputs are available, so you can't use the Sharp HT-SB400 soundbar for surround audio from a high-definition television channel (although plain old stereo will still work).

The touch-sensitive buttons on the front of the Sharp HT-SB400 allow you to switch between equaliser settings — News, Sport, Cinema and Standard presets are available — as well as allowing volume adjustment and input switching. All of this can also be accomplished with the credit card–style remote, which also allows control of a Sharp television. Individual bass, treble, centre speaker and subwoofer adjustments (with a weighting of plus or minus 5) are also easy to find on the remote control.

The Sharp HT-SB400 can be used on a bench-top with the supplied spikes or foam cushion pads, and a wall mounting plate is also included. The soundbar is designed to sit below a television to augment its internal speakers.

Sound quality from the Sharp HT-SB400 is good given its small dimensions. Treble is consistently clear and detailed up into higher volume levels, providing a strong emphasis on television shows' dialogue. Mid-range sound is well bolstered by the internal 'subwoofer' speakers, but needed a bass boost to emit pleasant-sounding timbres. Lower bass is present, but subdued — the internal displacement of the speaker simply isn't expansive enough to recreate lower frequency tones faithfully. If you crave floor-shaking power you'll need to connect an external subwoofer — thankfully Sharp has addressed one of our criticisms of the Sharp HT-SB200 by including a subwoofer pre-out port.

For the audio quality boost over a television's standard speakers, the Sharp HT-SB400 isn't excessively expensive. It's significantly cheaper and smaller than a full home theatre system, so if you're short on space and money then it's a valid option.