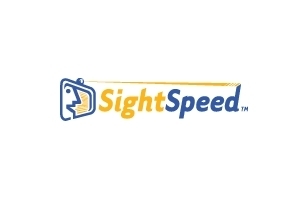 Though you won't mistake a SightSpeed video call for a movie, the quality is good. Unlike PC-calling apps like Skype that have added video features, SightSpeed's focus has been on video from the start -- and it shows.

Videoconferencing software has come a long way since the late 1990s, when unsophisticated programs and limited bandwidth made participants sound and look like astronauts aboard the Space Shuttle; we often expected to see a coffee mug float across the screen. Not anymore. We tested the new video-calling app SightSpeed 6.0, and though its video quality wasn't perfect, its performance -- especially its ability to sync audio and video -- was impressive.

SightSpeed is available in two versions, a free edition and a Pro package; the latter review (Business) adds features designed for business users, such as multiparty video calls and priority tech support. Both versions require a webcam and devices for audio input (microphone) and output (speakers or a headset). To try it out, we used various combinations of speakers, webcams with integrated microphones, and headsets with embedded microphones.

Downloading and installing the software is a snap. It automatically locates your audio and video source, and helps you adjust their settings for peak performance. After the initial setup, you can tweak the settings, but unfortunately you can't do so when you're on a call. So if you're in the middle of a conversation and you notice, for example, that the tint of your camera is slightly off, you have to hang up before you can correct the problem.

Version 6.0 sports a new tabbed interface for access to all of SightSpeed's features. To add a contact, you simply enter an e-mail address on the Contacts tab; if the person is already a SightSpeed user, you'll see their name appear on your list. If the person isn't a user, SightSpeed will issue an e-mail invitation to download the software. All of your contacts are listed on the main screen, with a green icon indicating when they are available. When you mouse over a name, you'll see icons for connecting via video call, PC-to-PC voice call, or text chat; you'll also see expanded call controls at the bottom of the screen. In addition, you can send video e-mail to your contacts.

A pop-up window notifies you of incoming calls; simply click Answer, and you're connected. SightSpeed says that the video quality in version 6.0 is 25 per cent better than that of past versions. We can't verify that claim, but we can say that, overall, the video was quite good, though some colours looked washed out and the video appeared blocky at times. When we tested SightSpeed at home over a cable modem, the video seemed very clear (with no weightless objects tumbling by in the background). When we tested it on a busier office network, though, the video appeared noticeably pixelated, and the audio was garbled. After network traffic subsided, both the video and audio improved substantially. Both were in sync, too, though our caller noticed an echo when we used a speaker-and-microphone setup. This likely occurred because our microphone picked up her voice coming out from our speakers, allowing her to hear her own words shortly after speaking them. The problem disappeared when we switched to a headset.

The quality of SightSpeed's PC-to-PC voice calls is on par with that of services like Skype. In version 6.0, the text-chat feature is contained in its own window, which makes it feel more like a stand-alone IM app (though you can chat only with other SightSpeed users).

The app also lets you record brief video clips that you can send as messages or embed in blogs or other Web pages. The free version allows you to make clips of up to 30 seconds in length, while the Pro version permits 180-second videos. The Pro software lets you record live calls for later reference.