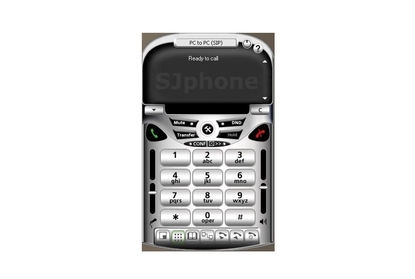 Technically a brilliant product but not the prettiest interface around.

SJPhone is a deceptively simple VoIP client that supports the two main industry standards for call control - Session Initiation Protocol (SIP) and H.323. What this means is unlike the peer-to-peer based systems, SJPhone isn't limited to calls between two computers running the same client software or restricted to using one company's gateway systems for accessing Plain Old Telephone Systems (POTS).

The SIP protocol is very commonly used by internet telephone service providers to set up calls - it can be configured to allow direct calls from one SIP client to another or to handle calls via a SIP proxy. It carries another protocol, called Session Description Protocol (SDP) which defines characteristics of each call including the codec to be used with Real Time Protocol (RTP) once the call is established. Voice codecs are different ways of encoding the audio voice signal and are used to ensure the best call quality over a given link - for example, the g711 codec has excellent call quality but needs a lot of bandwidth. The g729a codec doesn't sound as good on a local network, but because it needs less bandwidth a call over a modem connection will sound a lot better when it is used. H.323 is a competing protocol to SIP and can also be used for direct calls between clients, but it is more commonly used to connect to gateways such as Cisco routers which then handle the call.

The most striking feature of SJPhone is that it supports skins. In its basic form the client is a very uninspiring Windows button and tab-driven affair, but it comes with two other skins which provide mobile-phone style interfaces with simple buttons for accessing contacts, conferencing, transferring and muting calls. The contacts interface provides lists of missed, received and dialed calls, contacts from Microsoft Outlook, speed dials and standard contacts entries. It has a neat feature of identifying other Sip or H.323 capable clients on a LAN and showing them on the neighbors tab.

Other than the contacts tab and the main dialer window the only other thing to SJPhone is the options window. SJPhone keeps the interface simple by doing most things automatically - instead of running through an audio setup wizard and tuning microphone and speaker volumes, in SJPhone a click on the audio setup tab's "Automatically adjust microphone volume" is all that is needed. This philosophy extends throughout the product, which makes the interface seem a bit bare compared with other VoIP clients. The options include the ability to automatically accept incoming calls, to ignore all calls, define hotkey operations and to choose skins. Most importantly, SJPhone allows multiple session profiles. This allows the end user to configure any number of internet telephony providers that can provide a low cost gateway between the internet and POTS handsets around the world. Use one in Britain for calling friends in London, one in the US for calling New York and switch between them instantly. Combine that with a simple interface and SJPhone is a winner, it just needs some cooler skins.