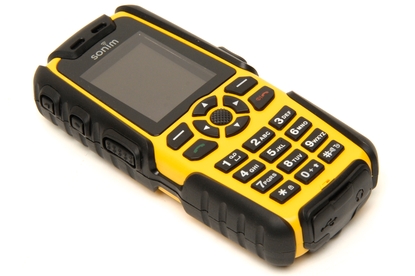 The Sonim XP3 Enduro ruggedised GSM mobile phone is tough, waterproof and very good value. If you have an active lifestyle or work in a tough environment where accidents are common, this is a phone that's well worth a look.

The Sonim XP3 Enduro is a ruggedised GSM mobile phone that is tough and waterproof. If you live or work in conditions where accidental drops are common, this is a phone that will come in handy.

If you're a tradie, construction worker or just a fan of the outdoors, you'll be interested in ruggedised phones. As GSM coverage grows to include increasingly remote locations, mobile phones like the Telstra F158 and the Sonim XP3 Enduro must be built to cope with the conditions.

The Sonim XP3 Enduro feels very solid and capable of taking some punishment. Sonim says that the mobile phone can be repeatedly dropped onto hard surfaces from up to two metres, and we tested this claim on a variety of surfaces.

When dropped on concrete, tiles, dirt and wood, the phone usually stayed on.

When we dropped it at an angle that focussed the force of the fall on a single corner, however, the Sonim XP3 Enduro switched off and the SIM card disconnected. This meant that we had to unscrew the back plate and remove the battery before reassembling the phone. Both the phone and the SIM card were completely undamaged.

The screws are there for a good reason. Between the back plate and the Sonim XP3 Enduro's chassis sits a small rim of clear rubber, which forms a seal that prevents water from seeping into the phone.

Sonim says that the phone can be kept at a depth of up to 1 metre for 30min, and during our tests we were able to operate the phone underwater. Although the one metre limit means that scuba divers won't be text messaging anytime soon, accidentally dropping the phone into a bucket of water or a pool shouldn't cause long term damage.

Sonim utilises a simple icon-based menu with a range of functions like a phonebook, organiser, voice recorder, picture browser and call lists. The Sonim XP3 Enduro has no built-in camera or MP3 playing capability, and has only 10MB of internal storage. The menu is quick and easy to use. The well-spaced buttons make the handset simple to operate, even when wearing gloves.

By holding down the button on right side for three seconds you can turn on an LED light; you could use it if you're having trouble fitting a key into a lock in the dark, for example.

When connected via the mini-USB port to a computer with the Mobile Phone PC-Tools software installed, you can sync your address book and organiser or use the Sonim XP3 Enduro as a wireless GPRS modem to connect to the Internet. Sonim doesn't include the software with the handset, so you'll need to download it first.

Outgoing and incoming audio are fuzzy and distant sounding. This is common for water-resistant phones, as the speaker and microphone must be more isolated than in standard phones. Even so, the sound quality is good enough for comfortable conversations. According to Sonim, the XP3 Enduro has 6 hours of talk time and 320 hours of standby time.

The Sonim XP3 Enduro is available for $0 upfront on selected Crazy John's and Vodafone Cap plans of $49 a month and above or $599 upfront for the handset alone. The handset is exclusively sold through Crazy John's.