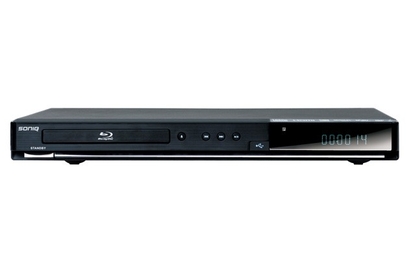 The Soniq QPB302B does everything you could possibly want from a sub-$200 Blu-ray player. Any niggles are more than made up for by that dirt-cheap price tag.

The Soniq QPB302B is an entry-level Blu-ray player characterised by sleek good looks and an impressive feature set. It’s a well equipped Blu-ray player for the asking price, boasting DTS HD master audio, optical and coaxial digital audio outputs, BD-Live (via Ethernet cable), a front-mounted USB port and MKV/DivX/DivX HD codec support. More importantly, it punches above its weight in the BD playback department, offering crisp images bursting with vibrant colours. In other words, the Soniq QPB302B is not just for cash-strapped bargain hunters — it will also appeal to (brand-neutral) videophiles.

With an RRP of $149, the Soniq QPB302B is one of the cheapest Blu-ray players on the market. It trumps Australia’s former champ, the Kogan Blu-ray Player Full HD 1080P, by a not-insignificant $40. (Note: Soniq also offers a scaled down version called the Soniq QPB301B -- which retails for a frankly ridiculous 96 bucks.) If you're looking for a cheap way to enter the HD space, it's pretty hard to argue with that ultra-low price tag. [Note: Kogan has just released a new Blu-ray model of its own which retails for the same price as the Soniq QPB302B. We'll bring you a review soon.]

When we first pulled the Soniq QPB302B out of the box, we were surprised by how attractive it looked. With dimensions of 430x38x225mm, it is considerably smaller than most of its entry-level competitors, which tend to be big and bulky. The face plate sports a slick metal finish that reminded us of a high-end Sony camcorder (the similarity extends to the front-mounted USB port, which has a dinky rubber flap). On the downside, the assortment of logos on top of the device lends it a bargain-basement air. It's a minor but annoying eye-sore — the equivalent a speck of dust that you can’t quite blink away. Cheap logos notwithstanding, this is one of the few budget Blu-ray players that we’d happily make the centrepiece of our home theatre setup. The remote is also pretty solid, with a chunky feel and large, responsive buttons.

To test the Soniq QPB302B's playback performance, we connected it over HDMI to a Pioneer KURO PDP-C509A plasma TV and watched the Blu-ray edition of Terminator: Salvation. The Soniq QPB302B did a great job at rendering complex textures, with plenty of fine detail in the aerial shots of LA’s blasted cityscape. The image quality easily matched other entry-level players we've tested, including pricier models from the likes of Sony (Sony BDP-S370) and Panasonic (Panasonic DMP-BD60). Loading up the disc took 49 seconds, which is acceptable for a Blu-ray player.

We were less impressed by the unit’s DVD upscaling abilities, however. Our standard-definition test — the lobby scene from the Matrix — lacked the vibrant ‘pop’ we have come to expect from Blu-ray players, with some noticeable grain marring the picture. It still does a better job than a regular DVD player -- but we have seen sharper results elsewhere. Despite making an alarming racket during startup, the Soniq QPB302B remained silent throughout playback.

All in all, the Soniq QPB302B does everything you could possibly want from a sub-$200 Blu-ray player — and has great image quality to boot. Its faults, such as they are, can be easily forgiven in the face of its low price tag.