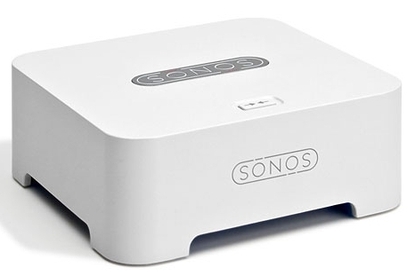 While we experienced some problems using a Sonos system with a ZoneBridge, they weren't out of the ordinary (unfortunately) for network streaming devices. We'd still recommend a ZoneBridge if you're going to spring for a Sonos system and your router is in an area of the house where you don't plan on listening to tunes.

The Sonos Digital Music System, introduced in 2004, is a well-designed, generally reliable way to stream music from devices (including PCs and hard drives) on your home network to multiple rooms. But it's also expensive – at least $1000 for a basic system. The new ZoneBridge 100 connector, however, will make a Sonos system cheaper for some households.

Until now, a Sonos system consisted of ZonePlayers (normally two) – networking devices that output music to your receiver or to a set of speakers – and the Controller, a remote with a three-inch LCD that looked like an overgrown iPod. You control your music either through the Sonos software that you install on your PC, or via the Controller. But the system isn't completely wireless: one of your ZonePlayers must have a wired connection to your router in order to stream music from your PC or networked hard drive; this leaves one unwired ZonePlayer to be placed elsewhere in the house. If you wanted to stream music to additional rooms, you had to pay at least $350 for each extra ZonePlayer – a lot of money if you just wished to listen to music in a room other than where your router resides. In that instance, the new ZoneBridge is a better choice. It doesn't output music, but instead serves as the wired connection to your router, and it costs only $189.

Our experience with a Sonos system that included a ZoneBridge was a little spotty. A few times during our two weeks of testing, the bridge lost its connection to the ZonePlayer we were using in our test centre (about 50 feet away), and we then had to re-establish the connection to the player. That took only a minute or two, but was still a hassle. Also, a number of times the music just cut out for 30 seconds or so, then came back on its own.

About the same time that Sonos released the ZoneBridge, it also pushed out a free software upgrade that lets you search your own music library or the huge libraries of online services like Rhapsody (the Sonos system can play music from Rhapsody, Napster, Sirius, Pandora, and other online music subscription services). You can search for artists, albums, composers, or tracks. To type a query on the $399 Sonos Controller, you pick letters from an on-screen keyboard using the scroll wheel. This isn't the worst method of entering text we've come across, but it's not the most efficient either. Trying to nudge the cursor from one letter to its next-door neighbour (from s to t, for instance) can be frustrating. Sometimes you move your finger but don't go anywhere; other times, you move it a little and jump two letters instead of one. Still, adding search makes Sonos far more usable with a service like Rhapsody that has too many artists and albums to simply scroll through.