The Sonos ZonePlayer S5 looks a bit like an iPod dock, and its price is in line with high-end docks from companies such as Bose 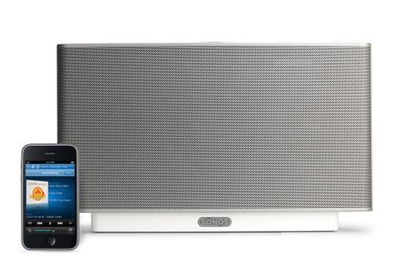 If you aren't deterred by the Sonos ZonePlayer S5's unique set-up requirements, you'll be hard-pressed to find an all-in-one system that sounds better or is more versatile.

Sonos makes multiroom network music streaming components that are elegant and reliable and great-sounding, but rarely inexpensive. At $699, however, the company's new Sonos ZonePlayer S5 is quite affordable, though it won't be the right option for everyone.

The Sonos ZonePlayer S5 looks a bit like an iPod dock, and its price is in line with high-end docks from companies such as Bose. But most people won't connect their S5 directly to an iPod. Instead, they'll wire it (via Ethernet cable) to a router so that they can access music from their PC's hard drive, from internet radio, and from web music sources such as Last.fm, Napster, Pandora, Rhapsody, and Sirius.

Though the Sonos ZonePlayer S5 has no control interface other than volume buttons, you have several options for operating it. One is to control it with free software that you've loaded on your PC or Mac. Another is to download and use a free controller app for your Apple iPhone or iPod Touch. A third is to buy the elegant, attractive, and expensive Sonos CR200 Controller.

Now matter how you tell the Sonos ZonePlayer S5 what you want it to play, you won't be disappointed by its sound. The player has five speakers, each with its own dedicated amplifier, and it aced every sonic test we gave it: rock, jazz, classical, and vocal music all sounded wonderful. Despite the player's small size, it clearly and distinctly reproduced the contributions of each recorded instrument in the tracks we played.

The sound is detailed. The high end is crisp and precise. Other docks we've tried have rendered the bass-heavy Seven-Nation Army by the White Stripes with a bigger boom, failing to pick up the fuzzy nuances of the bass line as the Sonos ZonePlayer S5 did.

The Sonos system provides an exceptional wealth of listening options. For instance, you can search for podcasts and listen to them directly through the ZonePlayer - no iTunes syncing required. And the system comes with preloaded connections to thousands of radio stations from around the world. If you just want to listen to your iPod (or any other device with a headphone output), you can plug it into the back of the Sonos ZonePlayer S5.

And the Sonos system is easy to expand. Add another ZonePlayer (aside from the S5, Sonos makes various ZonePlayers that can connect to an existing stereo system or to powered speakers), and you can play the same music in two different rooms, or play different tunes in different parts of the house.

For some people, however, the Sonos ZonePlayer S5 isn't a great deal. If you want a stand-alone music player that you can operate in a room that doesn't house your router, the S5's value proposition gets iffy, since you'll have to buy a Sonos ZoneBridge to connect to your router. If you don't have an iPod touch or an iPhone, and you want a handheld controller, you'll have to spring for a Sonos Controller.