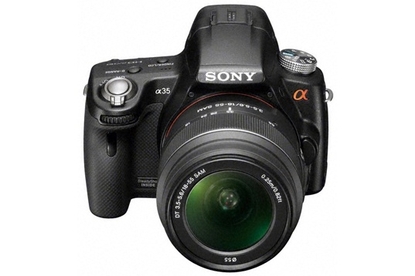 The Sony Alpha A35 is a viable alternative for its entry-level Canon EOS 600D and Nikon D3100 competitors. It doesn’t have any special surprises in picture quality or usability, although we think the build quality of the bundled lens isn’t great and the buttons could be easier to press. The A35 is very compact and has effective built-in image stabilisation and excellent Live View.

The Sony Alpha SLT-A35 is an entry-level digital camera. It’s half-way between a digital SLR camera like the Canon EOS 600D and a mirrorless interchangeable-lens camera like the Olympus E-P3, because it has a ‘pellicle’ mirror — it can focus as fast as a digital SLR while showing a live view image on the rear LCD screen like a mirrorless camera. In theory it’s a good compromise between convenience and image quality but for all intents and purposes the Sony Alpha A35 is another good-but-not-great camera in an already-crowded market.

Read our selection of the top digital SLRs for August 2011.

The Sony Alpha SLT-A35 is laid out like a traditional digital SLR camera, with an electronic viewfinder above a 3in rear LCD screen and a large finger-grip on the camera’s right-hand side. Buttons are laid out on both the top and rear, and there’s a mode dial on the left-hand top, near the button for the built-in pop-up flash. This layout isn’t anything special, but what caught our attention was how about half the buttons are slightly recessed into the camera’s body. If you’re using the Sony Alpha A35 up to your eye, this makes some of the buttons hard to find and press. Another puzzling feature is the lack of articulating LCD screen that the earlier Alpha A33 had (which also appears on the competing Canon EOS 600D and Nikon’s step-up D5100).

The body of the Sony Alpha A35 is compact for a digital SLR. It’s still a chunky beast compared to a mirrorless camera but alongside a Nikon D3x or a Canon 5D Mark II it’s toy-sized. This makes it great for throwing into an overnight bag or purse where a larger camera might be a hindrance. The A35’s ergonomics aren’t seriously compromised by the smaller size, though.

The Sony A35 accepts Sony A-mount lenses, with the camera available in single- and twin-lens kits. We tested the A35 with the kit 18-55mm lens, which is a general-purpose wide-angle zoom. Disappointingly, it’s cheaply built with scratchy plastics, and doesn’t zoom smoothly across the entire range. It’s also quite loud when focusing (which it does admittedly do reasonably quickly) — we’d opt for a different lens if possible.

The live view on the Sony Alpha SLT-A35 — the live video feed on the rear LCD and through the electronic viewfinder, in lieu of a through-the-lens view like on a regular SLR camera — is excellent. It’s smooth and accurately shows the exposure of the image you’re about to capture, and operates well even in low light. If you’re an amateur photographer that prefers composing images on the rear LCD, the Alpha A35 is a superior choice to other entry-level digital SLRs like the Canon EOS 600D and Nikon D3100 in this regard.