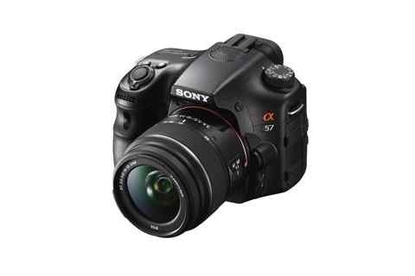 The Sony Alpha SLT-A57Y is an interchangeable lens camera that's well worth considering. It's a camera that can capture wonderfully clear and vibrant images without you having to fiddle around with the settings too much. We think you can have a lot of fun with it, especially if you go for the twin lens kit that has the 55-200mm lens in it.

Sony's Alpha SLT-A57Y is a 16-megapixel, mid-class interchangeable lens camera that's designed to appease users who want something relatively easy to use, yet also capable of capturing very clear and vibrant images. It's a camera that we grew to love the more we used it, primarily for those reasons, but also for its overall speed.

The SLT-A57Y isn't a traditional digital SLR. It looks like one, feels like one, and it can take different lenses thanks to its A-mount ring, but it doesn't have a conventional mirror box in which light is reflected up to an optical viewfinder from a mirror that gets out of the way of the sensor when the shutter is pressed. Instead, the Sony uses a fixed mirror that's translucent, which allows light to pass straight through to the sensor without moving. The image isn't reflected from the mirror into an optical viewfinder like it is in a digital SLR (the Sony has an electronic viewfinder, or EVF); instead, the mirror's purpose is to bounce light up into a dedicated sensor that can enhance auto-focus operations.

The result is a camera that does indeed posses superb focusing abilities, both when it comes to still images, live view and videos. We found it to be quick and accurate throughout our test period, even when focusing in relatively low-light situations with little contrast between objects. You can elect to focus either continuously or in single-shot mode, and when using the EVF you can also enable the Eye-Start AF feature, which focuses automatically as you move the camera around a scene. Furthermore, you can focus on a spot area, across a whole scene, you can choose an individual focus point (you have 15 to choose from in a central cluster) and you can even use tracking (with great accuracy across the frame).

We're also very impressed with the camera's metering and ability to expose shots almost without any problems. We used the camera extensively in aperture priority mode when shooting outdoors in very bright and challenging conditions, and the results were impressive to our eyes. Only few shots contained highlights that were greatly over-exposed (or blown); the exposure in general was handled in a way so that images possessed good dynamic range and didn't look underdone — colours were vibrant, yet not unrealistically rich in JPEG mode by default (you can shoot RAW, too).

For our tests, we used the 55-200mm kit lens exclusively and we found it to be an excellent companion for this camera. It can produce wonderfully blurred backgrounds when you use a shallow depth of field, with out-of-focus elements taking on a perfectly round shape. It's the type of lens that makes photography lots of fun. The fact that it starts off at 55mm means some "foot zoom" needs to be used when taking photos of close-by objects (that is, you'll need to walk further back from your subject to fit more into the frame), but for portraits and distance shots, it's perfect. For wide shots, the 18-55mm lens can be used and it's part of the twin lens kit for this camera, which costs $1199.

Clarity in the images that we took was very high. Even when viewing images at their native size (4912x3264 pixels), they looked well defined and not at all pixelated. The only problem that we noticed when looking at images at their native size was some slight purple fringing around high-contrast areas, but this wasn't obvious when looking at the images on a smaller scale. The clarity of images taken at full zoom was also quite high, and we attribute part of this to the camera's built-in stabilisation, which can counter movement at the sensor level.

The built-in stabilisation also works for low-light situations and we found that we could capture handheld shots with a high level of clarity even when using a slow shutter speed — we had success even when the shutter was down to 1/6 of a second. A high ISO can be used to good effect, even up to a value of 3200 in some cases. Viewing images taken with a high ISO at a small size won't accentuate much graininess and loss of clarity; those will only be visible once you start cropping images taken with such a high ISO.

We've already mentioned how quickly the Alpha A57 can focus, but it's also a fast camera when it comes to shot-to-shot performance. Shutter lag is virtually non-existent and the Alpha snaps its shutter in a very swift, electronic-sounding manner. We clocked it at 3.5 frames per second (fps) when shooting in the low-speed burst mode; in the high-speed burst mode it was able to capture 9fps for a period of 3sec before slowing down.

The camera has built-in guides that you can consult if you're unsure of how to take a particular type of scene (just press the '?' button on the back) and there are various filters and scene modes to take advantage of, too. Furthermore, the control layout is comfortable and logical, and the menu system (both the main menu and the Fn menu) is easy to understand after a few uses.

Shots can be framed either through the EVF or the LCD screen, and you can use both at any time. There is a sensor that will switch off the screen when it detects that you're using the EVF. For better battery life, you are better off disabling the screen unless you need to frame a shot at a particularly difficult angle and looking through the EVF is not feasible. The screen is hinged at the bottom and can be pulled down and rotated side to side.

Video mode has its own dedicated button next to the EVF, and the camera can record 1440x1080-pixel video in MP4 files. We found the quality of the video to be very good and think the Alpha can be a capable hybrid if you're looking for a still camera than can do double-duty as a video camera with with pitcure effects and custom depth of field settings.

Overall, the Sony Alpha SLT-A57Y is a top-notch, mid-range camera kit that can yield high quality results. It can be used in full manual mode if you know what you're doing, but it will also do a great job when used in semi-auto and full auto modes. It's a relatively light and compact camera for what it is, and it shouldn't take you too long to master its controls and menu system. The main downside is the battery, which can deplete very quickly if you use the screen, but apart from that there is not much to dislike at all.