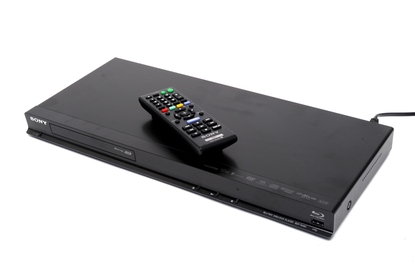 The Sony BDP-S480 has almost everything you could want in a Blu-ray player. It's reasonably quick to operate and incorporates plenty of video on demand services. Extra features in the form of 3D playback and an iOS/Android controller app justify its small price increase over the BDP-S380. We're still baffled at the lack of Wi-Fi, though.

The Sony BDP-S480 sits in the middle of Sony's line-up — it's $30 more expensive than the cheap Sony BDP-S380, but this small price premium gets you 3D video playback and remote control via a free iOS or Android app on your smartphone. We don't think the top-end BDP-S580's extra $50 for inbuilt Wi-Fi is justified — it should be in the BDP-S480 at no extra cost.

The BDP-S480 looks like — surprise, surprise — a Blu-ray player. Yep, there's no hiding it; the wolf-in-wolf's-clothing Sony has a tray-loading Blu-ray drive and a few buttons on its slim scalloped fascia. A little screen gives you a very basic overview of what the Sony BDP-S480 is doing, but the on-screen information display is far more detailed.

If you've got a reasonably modern TV — say, 1980 onwards — the Sony BDP-S480 will be able to connect to it. As usual we opted for the Blu-ray player's HDMI jack for the best possible picture quality in our testing, but the BDP-S480 also has component and composite analog video output. Digital audio means you can connect the Blu-ray player to a home theatre system that doesn't have HDMI pass-through. There's no Wi-Fi, which is annoying — given that Sony's touting its Web features it would have made far more sense to include it.

The Sony BDP-S480 comes with a small remote control which has all the necessary buttons for its playback and video streaming, but you can also download a free app for Android and Apple iPhone smartphones that gives you a touchscreen remote. It's got some nifty features, too — you can set a custom 'button' for shaking the phone, for example. The one caveat is that you'll have to have the BDP-S480 and the smartphone connected to the same network for the remote to work.

If you're setting up the Sony BDP-S480 for the first time, all you'll need to do is connect it to your network (wired Ethernet is built in but the optional Wi-Fi adapter is an exorbitant $99 extra) and run through a short setup process. A quick start-up option is available, but it means the BDP-S480 consumes a little extra power in standby mode.

The 'Xross Media Bar' is Sony's name for the interface it's been using on most of its home entertainment and TV products since the launch of the PlayStation 3, and it appears again on the BDP-S480. It's a little slow to operate on this particular player, with a small amount of lag between keypresses and the on-screen animation for changing selections. It's easy to understand and lets you access all the Blu-ray player's functions in a single menu structure.

The Sony BDP-S480 also adds Web browsing and Facebook access over the BDP-S380. If you don't have a computer and want to access these services the BDP-S480 is usable, but we think a laptop or even a smartphone does a much better job and with less hassle. The BDP-S480's Web browsing is difficult to operate with just the remote control and we found some page elements displayed incorrectly on some of the Web sites we visited — for example, there's no Flash support.

When it comes to playing Blu-ray or DVD movies, though, we have no problems whatsoever with the Sony BDP-S480. Movies loaded quickly and quietly and we were able to skip through a few of the annoying pre-movie warnings which sped proceedings up considerably. The BDP-S480 can't play movies from regions other than Australia, though. 3D support is trouble-free, although you'll have to have a 3D-capable TV. Just like we've talked about with the BDP-S380, the BDP-S480 is able to access all of Sony's BRAVIA Internet Video video on demand services, which are an excellent added extra.

The Sony BDP-S480 will play any Australian 2D or 3D Blu-ray movie or DVD you throw at it without any trouble. Its video streaming features are great. The Web browser and Facebook are missable in our opinion, and the lack of built-in Wi-Fi is frustrating, but otherwise the Sony BDP-S480 functions as expected.