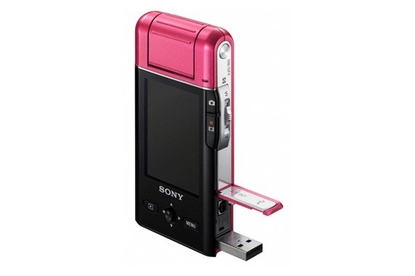 The Sony Bloggie MHS-PM5K is a reasonable option for video bloggers and their assorted ilk. Serious videographers, on the other hand, will most likely need to look elsewhere.

The ‘pocket camcorder’ has irrevocably changed the video landscape as we knew it. Smaller, simpler and infinitely cheaper, they have become the consumer’s number-one choice when it comes to capturing video. It has left traditional camcorder vendors feeling bewildered and endangered — like hulking Neanderthals in the face of a sleek new breed. Well, Sony has decided to fight fire with fire with the Bloggie MHS-PM5K. If you can’t beat ‘em, you might as well join ‘em, right?

The Sony Bloggie MHS-PM5K is a high-definition pocket camcorder earmarked for bloggers and budding VJs (that’s ‘video jockey’ to you and me). It records to either SD/SDHC memory cards or Sony’s Pro Duo Memory Stick format (a 4GB Memory Stick is included in the sales package). To our knowledge, this is the first Sony camcorder to offer SD memory card support; a move that is to be commended. Like the all-conquering Flip Mino HD, the Bloggie MHS-PM5K delivers a compact, user-friendly experience at the expense of video quality and advanced features. Nonetheless, it should still prove adequate for YouTube uploads and personal home videos.

The Sony Bloggie MHS-PM5K measures 54x19x108mm and weighs in at 130g. While not quite as portable as the Flip Mino HD (50x16x100mm), it will still fit inside most jacket pockets with relative ease. We were very impressed with the Bloggie MHS-PM5K’s build quality. Unlike some pocket camcorders we could mention, it manages to look bright and colourful without coming across as cheap. One caveat: the slide-out USB connector is poorly placed and far too short, which makes connecting to a PC a real chore. Thankfully, Sony has included a secondary USB cable in the sales package.

The Sony Bloggie MHS-PM5K is available in a range of four colours — pink, purple, blue and white. We tested the blue version, which sports an attractive glossy metal finish with black and silver highlights. While certain to appeal to ‘da yoof’, its design might be a bit too ‘hip’ for old duffer types. (Speaking of which, why aren’t there more geriatric bloggers about? Old people are famous for prattling on — you’d think YouTube would be the perfect outlet for them. But we digress...) The Sony Bloggie MHS-PM5K sports a swivelling lens that can rotate 270 degrees. This makes the camcorder ideal for blogging and other stationary shoots. The camcorder also comes bundled with a 360-degree lens attachment that can capture a whole room in panorama — handy for time-lapse videos of parties and the like.

The Sony Bloggie MHS-PM5K records 1080p HD video in the MP4 format. It boasts an impressively large 1/2.5in CMOS sensor with an effective pixel count of 5038K. Most pocket cams, such as the Kodak Zi8 HD and the JVC GC-FM1 make do with 1/3in sensors or smaller. The Sony Bloggie MHS-PM5K can also capture 5-megapixel still photos — while nothing spectacular, they should prove suitable for social networking sites.

In addition to 720p, 720i and 1080p, the Bloggie also offers a standard-definition VGA mode (640x480). Other features include face detection, anti-shake software, a 4x optical zoom and the aforementioned stills mode. This is woefully scant compared to a fully-fledged camcorder, but remains on par with most pocket cams. (i.e. – They’re designed for taking fuss-free, point-and-shoot video.)

To test the Sony Bloggie MHS-PM5K, we captured video at the highest setting (1080p) in a variety of environments. We then played back the footage on our PC. When used in optimum lighting, the Bloggie MHS-PM5K produced attractively sharp images that were fair bursting with colour. On the downside, ghosting was more problematic than we’re typically used to; even during slow and leisurely camera pans. This rules the Sony Bloggie MHS-PM5K out as an action camcorder — it ain’t called a ‘bloggie’ for nothing. Naturally, quality also took a sharp dip in dim environments, but we doubt many people will want to conduct their blogs in the dark. Provided you aren’t expecting to win Tropfest with this thing, its output should definitely satisfy.

Like most pocket camcorders, the Sony Bloggie MHS-PM5K is pretty light on features when it comes to connectivity. You get an AV output, a USB port and that’s about it. While we can accept the lack of microphone and headphone jacks, it would have been nice to see a HDMI output. Instead, a pair of composite cables is included for hooking the device to a TV.

As mentioned, the Sony Bloggie MHS-PM5K comes bundled with a 4GB Memory Stick, which will net you up to 120 minutes of HD video.