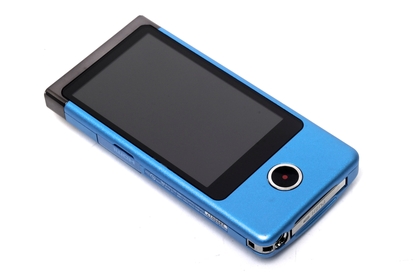 Despite a few design quirks, the Sony Bloggie Touch MHS-TS20 is a definite improvement over its non-touchscreen-equipped predecessor. It is capable of taking very attractive video and is ultra-stylish to boot.

"To blog, or not to blog: that is the question." If you believe online video blogs have a place in this world (and aren't, for example, a hideous brain-vacuum for a culturally barren society), then the Sony Bloggie Touch MHS-TS20 could be the product you're looking for. This stylish pocket camcorder boasts Full HD recording, a 12.8-megapixel still image mode, 8GB of embedded flash memory and a 3in LCD touchscreen that can be flipped vertically like an iPod Touch.

It also comes with simple inbuilt software that lets you upload photos and videos directly to Facebook or YouTube. On the downside, its unconventional shape may hamper DIY videography; especially if you don't own a tripod. Still, for just $299, it remains a pretty good deal.

The first thing that stands out about the Sony Bloggie Touch MHS-TS20 is its ultra-stylish design. With dimensions of 47x9x106mm, it's one of the slimmest pockets cams we've tested (its predecessor, the Sony Bloggie MHS-PM5K, measured a comparatively chunky 54x19x108mm).

If Apple ever releases a pocket camcorder it will probably look something like the Bloggie Touch -- its brushed metal surface is understated yet supremely stylish (just like the iPod Touch). Sony offers the MHS-TS20 in a range of colours including black, pink and silver. (We tested a sky blue version: for a closer look, click on the images above.)

The Sony Bloggie Touch MHS-TS20 is certainly more attractive than its predecessor, but these sleek good looks arguably come at the cost of functionality. One thing we preferred on the old Sony Bloggie was its swivelling lens head. This made it easy to frame subjects when the camera was in a stationary position (such as on a desktop). By contrast, the Bloggie Touch MHS-TS20 boasts a fixed, camera phone–style lens that cannot be tilted up or down. While this is fine for handheld recording, setting up a stationary shot can be difficult — you essentially have to move the subject into the frame, instead of adjusting the camera.

When you consider that most video blogs are a one-man (or woman) show, this is a pretty serious issue: it means you either need to invest in a tripod or get a friend to hold the camera at the required angle. (To be fair, this is something that most pocket cams suffer from, but as the Bloggie Touch MHS-TS20 is being specifically marketed at bloggers we thought it was worth pointing out.)

Despite this caveat, the Sony Bloggie Touch MHS-TS20 remains a solid offering; especially when it comes to video quality. To assess the MHS-TS20's video performance, we shot footage in a variety of lighting conditions and played it back on a Pioneer KURO PDP-C509A plasma TV. In all but the dimmest environments, the MHS-TS20 acquitted itself well. The camera's 1/2.5in CMOS sensor is more than capable of producing vibrant, highly detailed images. If you'd like to post your YouTube clips in high-definition, the Sony Bloggie Touch MHS-TS20 is one of the most accomplished (and cost-effective) options on the market.

We were also impressed by the Sony Bloggie Touch MHS-TS20's menu interface. Sony was one of the first vendors to introduce touchscreens to its camcorder range, and the years of fine-tuning show: the interface is both responsive and intuitively laid out. Handily, recorded clips can be flipped vertically or horizontally during playback — just like an Apple iPod Touch. Unfortunately, the glossy screen easily picks up smudges and fingerprints (a problem that's exacerbated by the lack of a cleaning cloth).

Most pocket cams suffer from poor photographic capabilities due to their small sensors and middling pixel counts. This is something Sony has attempted to rectify with the Bloggie Touch MHS-TS20. When used in optimum lighting, we were thoroughly impressed by the sensor's 12.8-megapixel output: images were crisp and colourful with no glaring aberrations. However, the lack of an inbuilt flash really lets the camera down in dim environments. Night photography is basically a hopeless endeavour. In other words, don't throw away your digital camera because you're still going to need it.

The 8GB of inbuilt flash memory will store four hours of HD video at the highest possible setting. Additional memory (up to 64GB) can be added via the Bloggie's SD card and Memory Stick slots.