An LED-backlit Sony LCD TV with IPTV and 3D capabilities There is plenty to like about the Sony Bravia HX900 LED-backlit LCD television, for both 2D and 3D content. The BRAVIA Internet Video platform is particularly exciting for couch surfers, while 3D capabilities show plenty of promise, though require some further tweaking. We're looking forward to putting these TVs through their paces in our Test Centre

Sony's recently announced Bravia HX900 series of LCD televisions offers LED backlighting, Internet content streaming and 3D compatibility. This mid-range series of LED TVs is available in 46in (KDL46HX900) and 52in (KDL52HX900) sizes, and offers plenty of features we can't wait to review in full when the TVs are released in July.

The styling of the Bravia HX900 series is based upon Sony's new "Monolithic Design" philosophy, made up of three elements: contrast of materials, on/off consciousness and a six degree upward style. For the most part, these are just marketing terms: the "contrast of materials" means the televisions are made out of aluminium rather than painted plastic, while "on/off consciousness" simply means they're supposed to look nice in the living room, even when turned off.

What does matter, however, is Sony's six degree upward style, which means the television is tilted slightly backwards for an optimal viewing angle when sitting on a couch. We weren't able to test this claim in its intended environment.

Most models in Sony's 2010 LCD television range offer LED edge-lighting, but the Bravia HX900 series instead has dynamic LED backlighting which provides a more consistent image across the display. Sony won't quote contrast ratio figures; most current LED TVs claim a 3,000,000:1 ratio, so we don't think the HX900 will be too far off. The TV can dim and turn off specific backlights. During a demonstration by Sony this seemed to provide much greater contrast than edge-lit TVs. However, we when viewing a stark black and white image we noticed the backlight fade when not watching the TV from directly in front of it.

The Bravia HX900 LED TVs have refresh rates of 200Hz but use Sony's Motionflow Pro 400 technology, which strategically inserts black frames to provide a more fluid look. When viewing scenes from Cloudy with a Chance of Meatballs, we found the look slightly too fluid, as if content was playing in fast forward. We have witnessed similar side effects in early 100Hz and 200Hz televisions, so this may need some tweaking in future revisions of the technology.

One of the drawcards for the Bravia HX900 LED TV is 3D capability. This isn't enabled out of the box, however; you'll have to first purchase at least one pair of Sony's custom 3D glasses and an infrared transmitter that sits under or on top of the TV like a Wii sensor bar. Sony's glasses should last 100 hours on a single battery, and have a range of about 5m away from the television. We aren't sure on pricing yet, but if Sony charges the same as Panasonic's £100 (AU$170) for each pair of glasses, 3D could be an expensive extra.

The 3D technology used in the Bravia HX900 LED-backlit televisions aren't like the red-and-green anaglyph images you might be used to. Instead, Sony uses active shutter technology in which battery-operated glasses sync via infrared to the television and work in combination to transmit 100 frames per second for each eye. Since the Bravia HX900 series are LCD televisions rather than plasma, the glasses don't have to be polarised. This means you won't get reduced brightness or "background flicker" as we witnessed when viewing Panasonic's 3D-capable Neo-plasma.

We won't be able to deliver a final verdict on Sony's 3D technology until we get a chance to closely examine the new TVs in our Test Centre. Based on our brief time with the Bravia HX900 LCD TV, we can say that there is definitely potential when it comes to sports, documentaries and video games, particularly when the PlayStation 3 receives a firmware upgrade in coming months. However, the content displayed by Sony wasn't always immersive or even in focus. Footage of a soccer match simply showed us that "simulated 3D" isn't very convincing, while a 3D version of the US game show Wheel of Fortune proved that the technology isn't appropriate for all content.

While the Sony Bravia HX900 LED television has a technical viewing angle of 178 degrees, Sony's 3D technology is only good for 120 degrees. This should suit most basic living room setups but it means you won't get the same experience if you sit directly beside the TV. 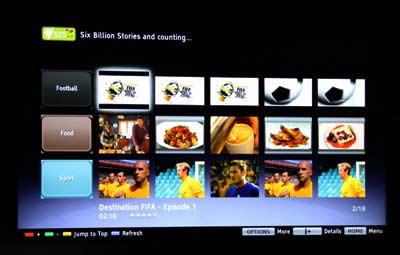 One other new addition to Sony's LCD televisions is an Internet protocol TV (IPTV) platform called Bravia Internet Video. Bravia Internet Video allows you to stream content over your broadband connection directly to your television. According to Sony, there will be 11 channels available at launch, with four more to come at a later date. Local content partners Yahoo!7, SBS and Billabong will provide access to shows like 30 Rock and My Kitchen Rules as well as surfing documentaries and FIFA World Cup 2010 highlights.

IPTV hasn't yet made it big in Australia, so it may take some time for content producers to provide more TV shows online. Bravia Internet Video worked well during Sony's demonstration, taking roughly 10 seconds to access and buffer a show; this will vary depending on the speed of your Internet connection. Unfortunately, Bravia Internet Video content maxes out at a 720p resolution depending on the content provider, with no plans to introduce 1080p shows yet. It remains to be seen how good this content will look on your 1080p Bravia HX900 LCD TV.

Though sitting in the middle of Sony's 2010 LCD television range, don't expect to buy the Bravia HX900 series with your spare change; it's likely to attract to Sony's premium price tag and the 3D capabilities will elevate initial price further. If you're not yet sure about 3D technology or don't want to upgrade quite yet, this LCD television will let you buy a great 2D TV and simply add 3D-capable accessories later on.

You can check out more specifications and detail over at our Sony 2010 LCD TV slideshow.