This huge 55in Sony LED television is good value for money 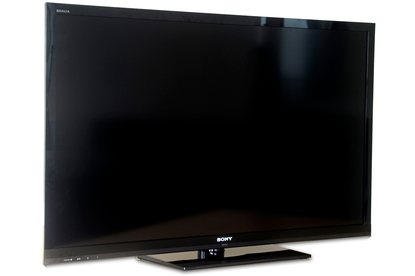 The Sony BRAVIA KDL-55EX710 is a relatively cheap edge-lit LED television that has a large screen with generally good picture quality. Its smooth motion control makes it an appropriate low-budget option for watching sport. It is also light on power usage, especially considering its size.

The Sony BRAVIA KDL-55EX710 is a mid-range edge-lit LED television. Its 55in panel size is imposing — it’s great for sitting back and watching sport or a Blu-ray movie, but you’ll need plenty of space to do it justice. The BRAVIA KDL-55EX710 has good picture quality, but we were more impressed by its low energy consumption. If initial outlay and ongoing costs are your key concerns then this is a great television to consider.

The Sony EX710 series is a minor update to the EX700 series, tweaking styling and adding the 55in screen size option. We approve of the BRAVIA KDL-55EX710’s new design, with a thinner bezel and better aesthetics — the EX700 had an attractive two-tone finish but the EX710’s dark plastics should suit a wider range of living rooms. The BRAVIA KDL-55EX710 is let down by Sony’s standard glossy screen finish, which is distractingly reflective. We’re hoping that this is a fad and disappears next year.

The KDL-55EX710 has access to Sony’s BRAVIA Internet Video software, with YouTube the stand-out attraction. The major difference between the EX710 and more expensive models is the absence of BRAVIA Internet Widgets, which offer interactive access to news, stocks and weather information.

There are more expensive models in Sony’s LCD television range, like the top-of-the-line BRAVIA KDL-52LX900 and the BRAVIA KDL-46HX800, but the Sony BRAVIA KDL-55EX710 still has sufficient contrast and overall picture quality to please most viewers.

We tended to prefer the Cinema preset for watching both Blu-ray movies and digital television. This mode has good contrast and brightness levels without sacrificing picture detail. We did notice some lost detail in dark and bright parts of the screen, but not enough to distract from the content itself. Generally video is vibrant and clear without being excessively sharp.

Being a large panel, motion control was an important consideration during our tests — artefacts and jumpiness are obvious on a 55in screen. When running through some cinema-speed panning shots on the Planet Earth Blu-ray we didn’t notice any jumpiness or flickering, while basketball on the ONE HD digital television channel showed only a small amount of artefacts during fast on-screen motion against a static background. We’d happily use this panel in its 100Hz mode for watching sport.

The Sony BRAVIA KDL-55EX710 has a seven star-energy rating, sipping an extremely low 138 Watts on average during use. It has a swathe of energy-saving features: the motion-detecting presence sensor is a favourite of ours, since we’re usually too lazy to turn the television off when leaving a room. It also has Sony’s ‘Energy Saving Switch’ — that’s right, it’s just a switch that cuts power completely instead of entering a standby mode. It is nonetheless a convenient way to turn the television off entirely if you’ll be out of the house for a while.