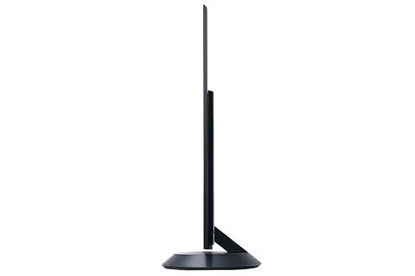 The Sony Bravia KDL40ZX1 is a Full HD LCD television that uses a high-definition wireless media streamer for delivering video. It is a great demonstration of the direction LCD television technology is taking and it comes highly recommended — if you can cope with the outrageous price tag.

Imagine an ultra-thin television — less than a centimetre for most of the panel — that only needs a single power cable plugged in to function. High-definition video from your Blu-ray player or games console can be streamed wirelessly with no distortion or interference. Picture quality is good and the speakers are powerful. That television is the Sony Bravia KDL40ZX1.

It certainly sounds good, but there is a caveat. The 40in Sony Bravia KDL40ZX1 will set you back just short of $7400, when other premium 40in models, like Samsung’s exceptional Series 7, cost only half as much. You are definitely paying a premium for ground-breaking technology.

The Sony Bravia KDL40ZX1 does have a lot going for it, though. Packaged in a box that’s much thinner than you would expect, and with a lot less protective polystyrene than other boxes we’ve seen, it’s easy to transport and easy to set up. It’s light, too; at just 12.2 kilograms, it was easy to move about before attaching the bundled conical stand.

The stand adds three more kilograms, but it also packs in some powerful omnidirectional speakers that provide a wide soundstage. They’re a little heavy on the mid-range and there is no bass to speak of, but they nonetheless have a pleasant character. If you’re mounting the television on the wall, the panel itself has a smaller set of speakers integrated into the bezel.

The Sony Bravia KDL40ZX1 has only one HDMI port built in; it's on the rear of the television near the power plug. This means that direct connection of a Blu-ray disc player is possible if you don’t want or need to use the external wireless media box. If you need multiple connections, though, the media unit has three HDMI connectors as well as three composite, two component, one VGA and one USB port (which can be used for playing back music, pictures and video off a flash drive). There are enough connections here to suit even the most hardcore A/V enthusiast.

This LCD television is so incredibly thin because all the bulky ports and electronic components are hidden away in the wireless streamer. As mentioned, the majority of the panel is a stunningly slim 9.9mm, while a small segment of it is just over an inch thick. We would have loved it if it was less than a centimetre thick for the whole panel, but hey — you can’t have everything. Wall mounting is what this television is designed for; it’s light enough that there is no need for a large or specialised mount.

The Sony Bravia KDL40ZX1’s static screen contrast ratio is a decent 4000:1. It jumps to 20,000:1 with dynamic contrast adjustment enabled. This LCD television is LED backlit, but in order to keep the panel thin the LEDs are arranged around the bezel pointing inwards rather than in a continuous sheet like the Sony XBR45 LED television series. This means that there is no segment-specific dynamic contrast adjustment (which is what allows the incredibly high contrast on the XBR45).

Contrast was a little lower than we expected, exhibiting a little black crush and loss of detail in high brightness areas. Colour is vivid and accurate, though, and there is plenty of fine detail visible in Blu-ray movies and high-definition games. Image noise and artefacts are almost nonexistent, even when playing back upscaled DVD video.

Sony’s MotionFlow 100Hz mode is as good as ever, offering either a Smooth or Standard jitter reduction mode. There are plenty of image adjustment options, so you can tailor the screen’s characteristics to your living space.

The RF wireless streaming system is, we think, the most important part of this television. It is simple to set up, offers good range — we tested it at up to 10 metres away from the screen without any transmission loss — and delivers crisp, uncompressed video. It also allows you to store all your digital video devices discreetly in an A/V rack and avoid the messy exercise of trying to hide cables behind a television stand. It’s stylish and versatile — about the only fault we could find with it was that it would have been great for a Blu-ray or DVD player to be integrated into it.

We’re impressed with the Sony Bravia KDL40ZX1. It’s thin, looks good and has the great feature of wireless high-definition streaming. The only real drawback is the painful price tag.