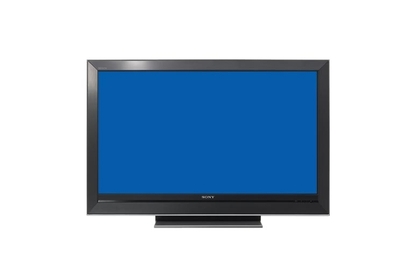 If you run a media centre, you may need to look elsewhere, but if high definition videos and gaming appeal to you, the full 1080p 43W3001 is a great value for money display.

Sony's Bravia W series is their entry-level line of televisions. They may not come with all the bells and whistles of the more expensive models, such as motion flow technology or the clear glass bezel, but all the processing power of the Bravia Engine EX is still included here. With a full 1080p resolution, the 46W3001 sits in between the 40in and 52in models and offers great high- and standard-definition picture quality at a relatively affordable price.

Our first test was using our Xbox 360 connected at a resolution of 1080p. We watched a shiny new copy of Transformers on HD-DVD, and were extremely impressed by the image quality. Everything was exceptionally crisp and sharp with great colour balance and excellent contrast. No detail was lost in dark areas and there was only a bare inkling of noise that occasionally reared its head in chunks of block colour. The only real problem we noticed was some slight ghosting in fast-paced scenes, but it wasn't too problematic and comes as no surprise considering the panel's 8ms response time.

This streaking was also evident during our HD gaming tests, but again it was not severe. Meanwhile this test corroborated our previous results, highlighting the 46W3001's great sharpness and contrast. Black levels were also quite impressive. We'd highly recommend this panel for anyone interested in HD films or gaming.

Standard definition was similarly well rendered. It is always tough for a panel with 1080 lines of horizontal resolution to upscale standard-definition content, as a lot of information that isn't there has to be filled in. Fortunately this panel did a good job. There were a few artefacts on sharp edges, but noise was mostly kept under control and colours were well balanced. Edges were a little soft, but overall we were very pleased with how the 46W3001 handled SD content.

It was during our PC tests that this panel fell down a little. There are two options for connection; D-Sub or HDMI. When running from an HDMI-enabled notebook we couldn't get the desktop to look right. It was far too small, taking up perhaps three quarters of the screen. Meanwhile running via D-Sub everything fit perfectly, but there were multiple image quality issues under this connection and D-Sub is quite a poor option these days.

We ran DisplayMate and were disappointed to find a lot of interference and noise across a wide variety of tests, from the block colour charts to the moire patterns and straight line tests. It was impossible not to notice this and it really made viewing a PC through the display irritating. We also noticed a general lack of clarity, with many of the sharpness and straight line tests lacking crispness. Colour and contrast were excellent as seen in previous tests, but that did little to counteract the other issues. If you run a media centre we wouldn't recommend this panel.

Fortunately it is well specified for a home entertainment setup, with three HDMI ports along with two component and composite connections. The included speakers will do in a pinch but you'll want a home theatre to complement a display of this calibre.

Aesthetically, Sony has diverged a little from the norm, with a gunmetal grey bezel adorning the 43W3001. It looks good and is a little different from the slew of gloss black models that litter shop floors these days.