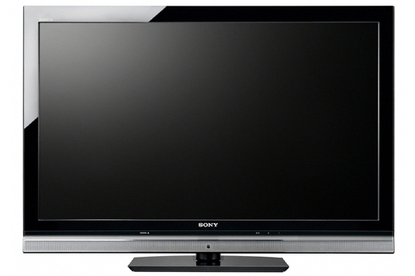 The Sony Bravia KDL46WE5 shows that cathode-backlit LCDs can be green-friendly without destroying image quality. The picture quality isn't as good as an LED-backlit TV, but the overall package is decent.

The Sony Bravia KDL46WE5 LCD TV is the Japanese electronic giant’s latest attempt at an energy-efficient television. But while it has green credentials, it’s not nearly as pretty as other Sony televisions.

The ports on the KDL46WE5 are reasonable for a television commanding this price. Four HDMI inputs mean you’ve got plenty of connectivity for high-definition devices. The two side-mounted HTMI ports make connection of devices like high-definition video cameras a breeze. Various analog inputs are also available, and the TV has a USB port and an Ethernet port. The placement of the Ethernet port on the side puzzled us, though — how often will you be connecting and disconnecting it?

Sony has often been at the forefront of television technology, with the world’s first 200Hz TV in the form of the Sony Bravia Z4500 and the world’s first Wireless HDMI transmitter in the Sony Bravia KDL40ZX1. The Bravia KDL46WE5's innovation is its hot cathode fluorescent lamp, which allegedly consumes 40 per cent less power than a regular CCFL tube (the kind found in ‘regular’ LCD TVs). You do pay for the privilege, but if you’re planning on keeping this TV for a long time the power savings should become apparent on your energy bill.

There are other features that help achieve a 4.5 star energy rating. A presence sensor in the bottom bezel turns the screen off when no-one is in the room, but it also has the downside of turning the TV off if you are a little too still. Sony’s Energy Saving Switch is an on/off switch that turns the television off completely rather than engaging a low-power mode. The value of this is questionable, with most televisions consuming less than a Watt in their dastardly non-green standby modes.

The Sony Bravia KDL46WE5 has good picture quality for a regular LCD panel. Sony’s MotionFlow 100Hz mode smooths fast motion, and the almost-ubiquitous 24p mode makes Blu-ray movies look film-like and natural. The television’s black levels aren't particularly good, with some grey backlight clouding visible in extra-dark scenes of The Dark Knight. The television was overly sharp in its default settings and colours were over-saturated; after a small amount of tweaking we reached a happy medium that did not rob the panel of high-contrast detail.

Sony’s multimedia features work as we expected, with the Picture Frame mode and music playback being the most useful. Sony’s XMB interface is always slick — we think it’s the best TV user interface currently on the market. The remote control is easy to use and has large buttons.

Overall the Sony Bravia KDL46WE5 performs well for an LCD television without LED backlighting, and we appreciate the energy-saving features.