The Sony Cyber-shot DSC-TX5 is something of a novelty: a ruggedised camera with an ultra-compact design. It's not quite as tough as some competing digital cameras, and we weren't overly impressed by its image quality.

Sony has unveiled its first tough camera in Australia: the Sony Cyber-shot DSC-TX5. You'd have to look carefully to know it's a tough one: Sony has ditched the rugged-looking exterior that kinds of cameras usually have. Instead, the Cyber-shot TX5 is an ultra-compact digital camera with a minimalist look. This fashion-forward design does not always work in the camera's favour, though.

The Sony Cyber-shot DSC-TX5 features a 25-100mm zoom range, coupled with 10.2-megapixel image sensor and a battery life of 250 shots. The Carl Zeiss lens sits behind a water-tight glass covering, and it doesn’t protrude from the body at all. A tripod mount is located at the base of the camera, next to the battery pack and USB cable slot, but it is off-set from the axis of the lens.

At the top of the Sony Cyber-shot DSC-TX5 you'll find the zoom rocker, shutter button, playback and power button, while the front of the TX5 hosts a sliding cover that also switches the camera on and off. The TX5 has a completely button-less backside, with a 3in touchscreen to access the menu functions. We would have liked a five-way control pad and some physical buttons — in our tests we found ourselves navigating through the menu system fairly frequently.

The LCD touchscreen takes up almost the entire rear of the camera’s body. The chassis is very small, which can prove to be vexing for those with long fingers and larger hands. We found in our tests that stray fingers often showed up in photographs, which would be extremely annoying if you wanted to snap a spur-of-the-moment shot. There really isn’t much space for you to rest your hands anywhere on the camera, which makes it awkward to use. In the TX5’s favour though, we are pleased to say that the touchscreen is accurate and responsive. 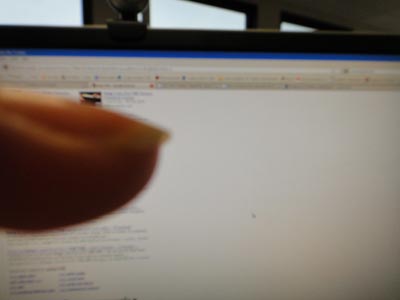 Operating the Sony Cyber-shot DSC-TX5 takes some practice. As a rule of thumb, if a camera is going to have a completely touch-based interface then it needs to be easy to navigate menus. In this respect, the TX5 failed to make things straightforward. Having to navigate between the menu layers using a touchscreen interface with ‘virtual buttons’ was irritating, especially when you just want to change a simple setting like macro mode. We think the inclusion of a few physical buttons and navigational wheel as well the touchscreen would make the camera more enjoyable to use. Although the Cyber-shot DSC-TX5 is a ‘rugged’ camera, in the scheme of things it really isn’t that tough. It is waterproof to a depth of 3 metres and drop shockproof from a height of 1.5 metres while the competitively priced Olympus Mju Tough 8010 and the Panasonic LUMIX DMC-FT2 both reach depths of up to 10 metres and can be dropped from a slightly higher height of two metres. During our tests we plunged the Cyber-shot DSC-TX5 digital camera into the depths of the IDG fish tank to spend some time with our fish named Google. We were more impressed by the camera's performance when shooting video than when taking stills.

We weren’t overly impressed with the Sony Cyber-shot DSC-TX5’s stills quality, which was average at best. Shots showed purple fringing (chromatic aberration) when shooting towards a light source. Even when we tested the camera in a well-lit environment, there was a lot of digital noise and pixilation. If you plan to use this camera in a low-light conditions, such as trying to photograph vibrant coral and fish while snorkelling, you may be disappointed with the results.

Sony has included a Sweep Panorama mode on the Cyber-shot DSC-TX5 to assist in taking shots of landscapes, panoramas, or a series of shots that you may want to stich together. We recommend using a tripod to achieve smooth results, as an unsteady hand will result in poorly stitched panorama. 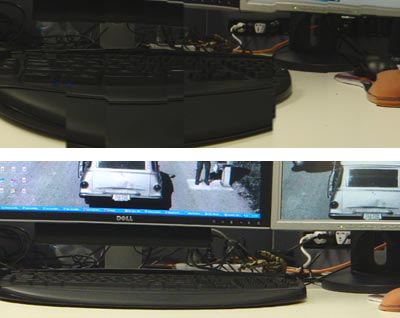 Beware handheld: The top photograph is an example of panorama mode when holding the camera, compared to the bottom photograph which was taken using a tripod.

We found during our tests that a drawback of Sony’s handy sliding cover is that tests that water can get trapped under the slider and take a considerable amount of effort to remove. We had to slide the cover quite a few times while wiping the lens with a cloth to remove the excess water. This appears to be a significant design flaw.

If you want to transfer images to your PC immediately after using the camera in the wet, you need to open up the Cyber-shot DSC TX’s waterproof seal to insert the USB cable. This leaves the camera susceptible to residual water droplets. Additionally, there is added risk of sand getting underneath the slider and scratching the front of the device itself.

The included manual for the camera does provide cleaning instructions, but it failed to mention the effort needed to ensure there is no remaining water located under the slider. In our tests it took us a good 35 minutes of periodically wiping the camera’s body to make sure it was completely dry.

While image quality was average, we were hoping for something a little better considering the offerings from Olympus and Panasonic deliver better features than the Cyber-shot DSC-TX5. As a ‘ruggedised’ camera it provides a level of toughness in wet and cold environments, but we wouldn’t use the Cyber-shot DSC-TX5 in any extreme conditions. We’d like the next Sony tough camera to offer better image quality, ditch the slider design, and feature some menu navigation buttons.