If you're after a small digital camera that can also shoot Full HD video, then the Sony Cyber-shot DSC-TX7 is a worthy choice. It can capture vibrant colours and a deep black, but it does suffer from chromatic aberration, lens distortion and colour bleeding. It's also not the easiest camera to use because of its design, but you get used to it after a while.

Sony's Cyber-shot DSC-TX7 is designed for people who want a slim compact camera that can be carried effortlessly in a pocket or purse. It's capable of shooting 1080p video in addition to capturing still photos, and it does away with control buttons; instead you can tell the camera what to do by tapping the icons on its touch screen. Its image quality won't set the world on fire, but it's more than suitable for everyday shots that will be used on social-networking sites or printed at a small size.

The Sony Cyber-shot DSC-TX7 looks stylish; it retains the slide-down lens cover we saw on the Cyber-shot DSC-TX1 and it feels solidly built except for the battery compartment. The battery compartment has a locking mechanism that is too small to use comfortably; it always looks like it hasn't been closed properly and that it will pop open at any second. It never actually popped open during our tests, but we're still looking at it thinking it will.

Because the camera is so slim and doesn't have a protruding lens at the front, it is difficult to hold. You can't hold it sturdily with both hands like you would a normal camera with an extended lens, as your fingers might get in the way of the lens. The lens is recessed deep in the body and it has a wide angle of 25mm, which means that it can see fingers if they aren't positioned far away from the bottom and side of the lens. You have to hold the camera in a dainty way (see below) in order to make sure your fingers aren't in the shot. This can lead to camera shake, which can produce blurry pictures in dim lighting. It would be better if the lens was positioned slightly further towards the centre of the body. 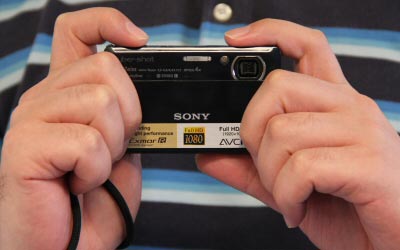 How most people hold a camera: in this position the lens will capture your middle finger. 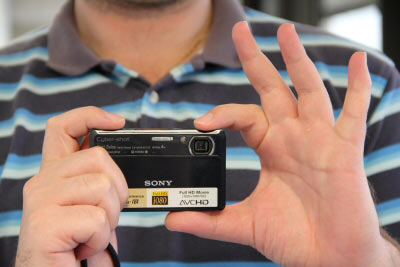 Hold the camera like this in order to keep your fingers out of the shot.

The shutter button feels very shallow and doesn't provide a distinct enough two-step process for focusing and then taking a shot. However, in Intelligent Auto Adjustment mode, the camera continuously focus automatically so you can just press the button all the way down in one go.

Once you master how to hold the DSC-TX7, then you have to master its touch screen interface. Everything can be done through the touch screen, from the initial setup to the selection of the shooting mode and the focus point, and it responds swiftly to commands. The screen can be difficult to view in very bright sunlight, which will not only make it difficult to frame your shots, but also to change settings. 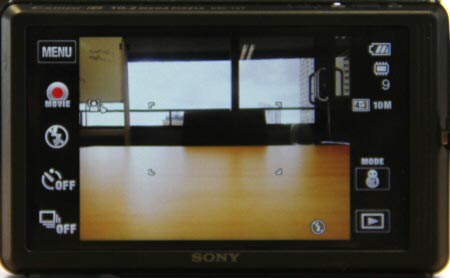 The screen has icons along each side that can be used to change the camera's settings, while the middle of the screen is used to frame your shots. 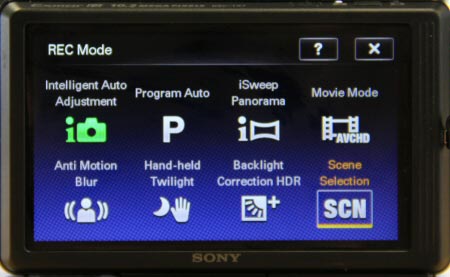 You can easily change shooting mode by hitting the 'mode' button, letting you select the auto modes, specific scene modes, movie mode or any of the other specialised modes. 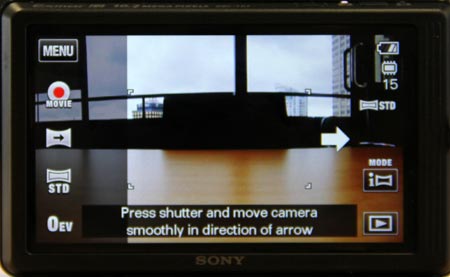 iSweep Panorama mode lets you capture panoramas effortlessly. Simply press the shutter button and sweep around slowly to capture a panorama greater than 180 degrees. It takes advantage of the camera's video mode (panoramas will be restricted to 1080 pixels in height) and performs well when capturing people and dynamic scenes. The same feature was in the Sony Cyber-shot DSC-TX1.

A 10.2-megapixel CMOS sensor is installed in the Cyber-shot DSC-TX7. It's one of Sony's Exmor R sensors, which is manufactured differently to most sensors. In a traditional CMOS sensor, the light has to travel through circuitry before it hits the photo diodes that capture the light. Exmor R is essentially reversed so that the circuitry is behind the photo diodes, which increases the amount of light that the diodes can capture. It is technology that was first introduced in the Sony Cyber-shot DSC-TX1 and Sony Cyber-shot DSC-WX1 cameras. It doesn't mean that your photos will end up looking super-crisp in dim lighting: The DSC-TX7 will still use a high ISO when it has to and it will regularly select ISO 800 for indoor shots. This will make photos look a little grainy, but they won't be ruined. In fact, the Sony Cyber-shot DSC-TX7's performance at this ISO level was quite good. 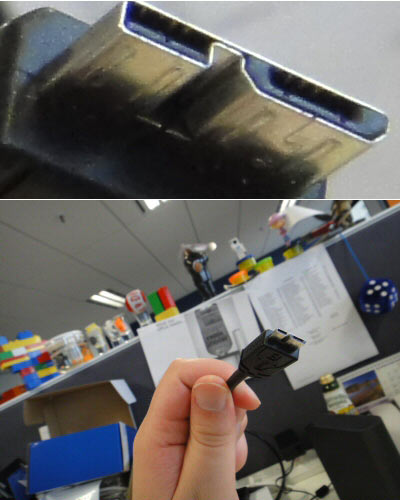 At ISO 800, the noise from the camera is very tame, and it won't completely ruin the picture even when you view it at its full size.

At the resolution of a typical 19in monitor (1280x1024), the Sony Cyber-shot DSC-TX7's photos will look fine. When you examine them at their full 10.2-megapixel resolution (3648x2736), they will look a little feathered around the edges and somewhat blotchy. Needless to say, you won't be able to crop your images too closely as this will affect the overall sharpness. You should aim to frame all your photos just the way you want them so that you won't have to crop them.

The lens has a 25mm wide angle and a 5x optical zoom, which translates to an overall length of 100mm when zooming. It distorts images a little and can make things look a little taller and leaner than they really are. Because of its relatively short range, it's not the type of camera you would want to take to the zoo, for example — as you won't be able to get close enough to the animals in many of the exhibits — but it's a fine zoom range for portraits and basic landscape photography.

We're pleased with the overall colour reproduction; there was plenty of contrast in our shots and bright reds and yellows were vibrant. Black, in particular, was deep and not washed out. 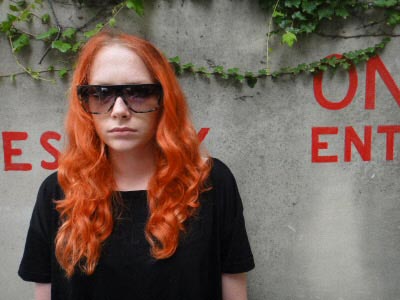 However, bleeding was very visible around the edges of bright areas and chromatic aberration was clearly visible in high-contrast areas. 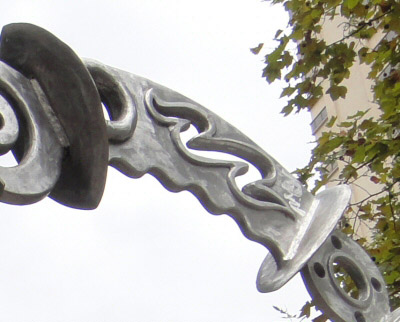 Event when zoomed in at around 50 per cent, purple fringing was very noticeable.

The same traits will be noticeable in video mode — especially on bright days — and light colours will bleed into darker ones. You can't use the camera to capture fast moving objects or shoot sweeping pans as the motion will look jerky; it's more suited to shooting relatively static scenes.

Despite some comfort issues with its design, the Sony Cyber-shot DSC-TX7 is a capable of capturing vibrant colours and deep blacks, and its high ISO performance is not too bad either. It will suit travellers who want a hybrid camera with which to take high-def video as well as still photos. It's worth noting that Sony has finally warmed to the SD card format; this camera has a slot that can accommodate both SD and Memory Stick Pro DUO formats.