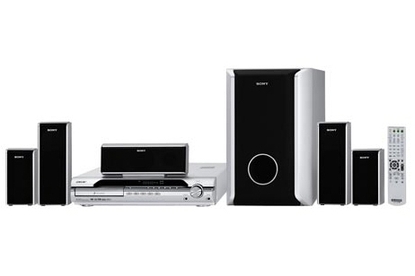 The Sony DAVDX155 is a good 5.1 system for entrants into the world of home theatre and, with the exception of the lack of digital audio inputs, performs well against similarly priced systems. The product is bolstered by the unusual inclusion of a five disc DVD changer.

Sony has strived to make its latest range of home theatre systems easy to use and quick to set up. We certainly feel this goal has been achieved, making the DAVDX155 a great example of intuitive design. The first step is to connect the six speakers to the main receiver. Each of the five satellites and the subwoofer are labelled and colour coded making them easy to differentiate and connect. Sony has opted for non-standard plugs on the main unit, which negates the needed for fiddling with wire ends, but this limits the user to Sony's proprietary wiring. On the rear of the unit, all the basic video inputs are catered for, with component, composite and S-video. However, it's a different case for audio, as Sony has chosen not to include any digital audio inputs whatsoever. This is a serious limitation in the system, meaning external audio sources cannot be connected digitally.

Once connected the system can be configured using the quick setup program. This runs through the basic image setup then performs automatic speaker calibration using the supplied microphone. The unit plays various tones through the speakers to measure the distance between them and the listening position, adjusting the sound levels accordingly. However, this doesn't adjust the subwoofer, and on the default settings we found it to be overwhelming, despite being non-powered. The subwoofer is quite large for a basic system, but isn't unattractive, and the same can be said for the main receiver. Sony's addition of a five disc changer makes the main unit far wider than is usual, but it isn't bulky. The system as a whole is finished in the stalwart home theatre silver.

When we came to test the DAVDX155's performance we found it to be a mixed offering. Starting with our standard test of the unit's surround capabilities, The Incredibles, the system offered good directional sound, but it couldn't quite match the feeling of immersion that other systems have supplied. The bass seemed overpowering and slightly disjointed from the satellite speakers, even after we had manually adjusted the levels. If you like booming sound though, the DAVDX155 can certainly perform in this area. All the usual sound processing modes are featured too, with Dolby Digital, DTS and Pro Logic II supported.

Switching on progressive scan the system produced crisp pictures and smooth motion, though colours while still adequate weren't quite as good as we've seen other systems using the same display setup. Strangely, some standard DVD features such as digital zoom were not present on the system. Switching between the five discs in the changer is easy, but slightly slow at around fifteen seconds per disc.

The DAVDX155 also supports music CDs and MP3, JPG and DivX files via CD or DVD. The sound from music CDs was again of mixed quality. There are no sound equalisation options available on the system, other than adjusting the levels of each speaker or activating a bass boost, which didn't allow us to tune the audio for the best possible experience. Playing The Killers produced a fairly lifeless sound, but in complete contrast Mr E's Beautiful Blues by Eels was spot on, with near flawless reproduction and accurate tones.

Browsing the directory structures of discs is also far harder than it need be, with the exception of JPG viewing, where thumbnails of all the images in a folder are helpfully displayed on-screen. Once the system has found DivX or MP3 files their playback is of excellent quality. DivX and other formats on the same disc cannot be browsed at the same time. Instead it is better to keep DivX files on separate discs.