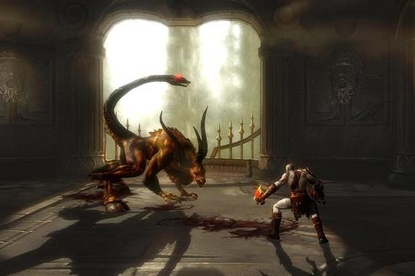 God of War 3 is more than an action game: it’s the conclusion to a commercially successful and critically acclaimed series that acts as the ‘face’ of Sony’s entire gaming brand; what Master Chief is to Microsoft and Mario is to Nintendo, Kratos is to Sony. As such, God of War III was burdened with a Herculean set of tasks. But while it lives up to the high bar set by the previous installments, it can’t quite bear the weight of bringing the epic story of Kratos to a meaningful end. It’s still a finely crafted action experience that fully showcases the PS3's immense capabilities but it isn't the satisfying conclusion that fans both want and need.

Talk about high expectations: as the final chapter in what is arguably the most successful action game franchise ever created, God of War III has a lot of things it needs to accomplish. One, it has to be a huge commercial success; two, it has to showcase the full capabilities of the PS3 hardware and raise the bar in terms of visual quality and gameplay refinement; and finally, it has to cap off the series' narrative arc in a way that not only meets fan expectations but brings all of the threads together into a cohesive and satisfying end.

God of War III gets the first two things right (or will, in the case of the sales numbers -- you can safely expect God of War III will become a best seller), but it doesn't do the most important thing: bring the story of Kratos to a meaningful end. Because God of War III is the culmination of one of the most iconic action game franchises, there's a lot hanging in the balance.

Kratos isn't some meathead mindlessly pounding his way to the end credits: there's a lot of history and subtext to his one-man war against Mount Olympus, and there was a tremendous amount of pressure to bring everything to a showstopping conclusion. But God of War III doesn't do that, delivering instead a weak and uneven narrative that's full of plot holes; it's a small vulnerability in an otherwise stellar game, but that's all you need to bring down a hero sometimes -- just ask Achilles. I've invested a lot of time and energy into Kratos' journey, and I both wanted and needed God of War III to make sense of the whole thing.

There is an admirable attempt made to tie up all the loose ends and give some meaning to Kratos' struggle, but the narrative lacks the sense of momentum and drive that made the series so special. The quality of the actual gaming experience, and what the game means to the PS3, is undeniable, but from a storytelling perspective, I consider it a bit of a failure.

The last image most gamers have of Kratos is him scaling Mount Olympus on the back of the Titan Gaia towards a climatic confrontation with Zeus. God of War III wisely picks up right at that point, and while the initial fight up to the peak is awe-inspiring -- the introductory sequence bests the previous high-water mark for the series, the Colossus of Rhodes fight from God of War II -- things soon go awry.

After letting you get this close to Zeus, the dev team pushes the reset button on Kratos and sends him back to the beginning where he once again loses all of his powers and gear; as a narrative device, it's a little cheap but it's forgivable considering the circumstances. If they'd let you fight Zeus right there and then, the game would be over in about two hours. But what's really problematic about the whole thing is how it's handled: the way Kratos is kicked off the mountain is not only a little ridiculous but incredibly anti-climatic as well. Without ruining anything, Zeus essentially goes "Shoo," and sends Kratos back to the starting line.

The plot incongruities slowly start to pile up from there: for one, you're kicked out of the way in the middle of an epic battle between the gods of Olympus and the Titans but you sort of get lost in your own little adventure, and the war, which would seem like it should be a focal point, fades into the background. Also odd is the fact that the assembled gods of Olympus show up to test you along the way but Zeus remains curiously absent throughout. It's almost as though he's purposefully turning a blind eye to everything, which doesn't make a whole lot of sense considering his estranged son brings a war into what is essentially his living room.

There's a moment in the first God of War when Ares kills Kratos by throwing a piece of rock halfway across creation and it isn't a stretch to assume Zeus could do something similar because so much is made of the fact that he isn't just a god but the god; and yet, rather than just snap his fingers and turn Kratos into a pile of ash, he ignores him and only pops up after Kratos has accumulated the power to destroy him. It's weak characterization and it's especially disappointing when you compare him to Kratos, a character whose plight and motivation is never in question. We know what makes him tick, but what about Zeus? He's a central character in the narrative arc and yet, he almost lives backstage, appearing only when it's convenient to the plot; he's literally a deus ex machina.

There's an attempt made at the end that tries to explain his behavior but it's a convenient plot device -- it's the Greek myth equivalent of the "temporary insanity" defense -- that doesn't quite work. All of this may not seem like a big deal to some of you but these are the sorts of questions I, as a gamer who's fully invested himself into the franchise, want answered and addressed, and I have a right to feel disappointed if they're not.

This isn't to say that the story is completely devoid of poignancy and meaning. There are actually a few moments of note, including one involving Kevin Sorbo of all people -- he appropriately voices Hercules, who is also a son of Zeus, and though he isn't around for long, I appreciated the angst and pathos that he brought to his scene; he shows a genuine bit of emotion that adds a subtle layer of complexity to Kratos' relationship with Zeus.

Kratos' interaction with Zeus' wife Hera is also interesting because of the way he ultimately deals with her; it's jarringly abrupt, to say the least, but it's perfectly in keeping with who Kratos has become at that point in the proceedings. You really start to see just how firmly in control the nihilistic side of his personality is: it's made abundantly clear at times that his mad quest for vengeance has ramifications far greater than his spiteful relationship with his father but Kratos makes it just as clear that he doesn't care: he's got something he needs to do and nothing, not even the destruction of the entire world, will delay him.

As he slowly works his way through Mount Olympus' pantheon, you start to see visible signs of the effect that Kratos is having on the world, and the fact that he won't allow that to affect him is a powerful testament to the strength of his will; so much could have been done with this but it's ultimately wasted on a thin storyline that meanders its way to an anti-climatic finish.