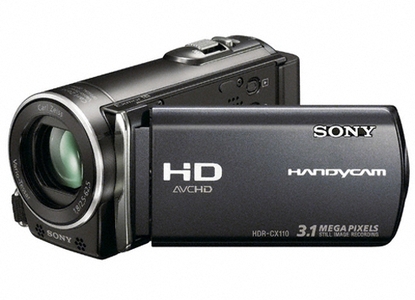 The Sony HDR-CX110 is an affordable flash-memory-based camcorder capable of taking attractive HD video. For the asking price, it's an impressive performer across the board. It will suit casual shooters and videographers looking for a cheap portable camcorder.

The Sony HDR-CX110 is an ultra-compact Full HD camcorder that records to removable flash memory cards. It uses the MPEG4-AVC/H.264 video format and comes equipped with a 25x optical zoom lens. As the entry-level model in Sony’s HD flash memory camcorder range, the HDR-CX110 lacks some of the features found on its costlier brethren — including inbuilt memory. However, it still offers plenty of features for the asking price and its video performance is solid. It will suit casual shooters and videographers looking for a cheap secondary camera.

Sony camcorders are famous for packing in useful gimmicks, and the HDR-CX110 is no exception. Among its repertoire of modes and features are spot focus, face detection, Smile Shutter, Steady Shot, a ‘child priority’ tool (which optimises focus and exposure to favour kids), Intelligent Auto, Smooth Slow Recording and some basic digital effects.

As you can see, the emphasis is on beginner-friendly tools, which is to be expected (i.e. it’s a point-and-shoot camcorder aimed squarely at casual users). That said, there’s still a smattering of manual modes to play around with, including exposure, focus and white balance. The afore-mentioned spot focus is also handy for those who like more control over their videos — it allows you to focus on specific subjects by pressing on the touchscreen. We were able to execute some pretty impressive focus pulls using this feature.

The Sony HDR-CX110 sports an ultra-compact body complemented by a flashy red finish (a black version is also available for camcorder traditionalists). On the downside, Sony appears to have adopted one of Panasonic’s design cues, with a conspicuous battery protruding from the rear (for more examples of this unsightly phenomena, check out our reviews of the Panasonic SDR-S26-K and Panasonic SDR-H80-K). To be fair, this is a purely cosmetic flaw that doesn’t affect the camera’s handling. All controls are within easy reach of the fingers and we found the touchscreen menu to be responsive and intuitive.

The Sony HDR-CX110 shares the same basic specifications as the 120GB Sony HDR-XR50. Both camcorders boast identical Bionz processing chips and 1/4in ‘Exmor R’ CMOS sensors, as well as a similar feature set. The Sony HDR-CX110 lacks inbuilt memory and is smaller than the HDR-XR50 (50x56x114mm vs. 57x67x114mm), but otherwise there’s little to distinguish one from the other.

Fortunately, both camcorders are impressive performers. To test the Sony HDR-CX110, we connected it a Pioneer KURO PDP-C509A plasma TV using the supplied component cables.

Images were exceptionally sharp in optimum lighting, with plenty of detail remaining in shadowed areas of the picture. Noise was an issue in dim lighting, but we've certainly seen worse results from similarly priced camcorders. All in all, we were more than satisfied with the Sony HDR-CX110's video performance.

The Sony HDR-CX110 also comes with an obligatory stills mode with a paltry resolution of 3 megapixels. To be honest, we’re not sure why vendors insist on adding sub-par photography modes to low-resolution camcorders — especially when they don’t include an inbuilt flash. Nonetheless, its output should be acceptable for social-networking sites and the like (presuming you’re in broad daylight).

In addition to Sony’s Memory Stick format, the HDR-CX110 is also compatible with SD/SDHC memory cards. This makes it a cost-effective choice if you own a compact digital camera that uses SD cards.