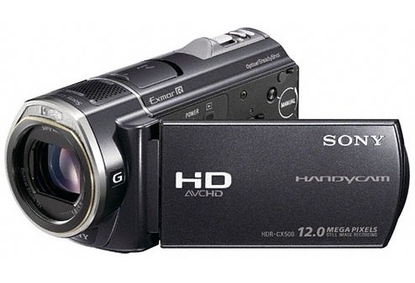 The Sony HDR-CX500V is a feature-packed Full HD camcorder sporting great image quality. If you're looking for a camcorder with plenty of tricks up its sleeve, you could do a lot worse than the HDR-CX500V.

The Sony HDR-CX500V is a flash memory–based Full HD camcorder with 32GB of inbuilt memory. Like the majority of its handycam brethren, the HDR-CX500V packs in a dizzying array of features and gimmicks, some of which are more useful than others. Highlights include a three-way optical image stabiliser (a world first), 12-megapixel still image capture, a Smooth Slow Record function, smile shutter and face detection technology, a backlit image sensor for increased light sensitivity and an inbuilt GPS. Its main claim to fame is probably the afore-mentioned three-way stabiliser, alongside its impressive video performance.

The Sony HDR-CX500V shares much in common with the more expensive Sony HDR-CX520V. In fact, it is identical to its big brother in all respects save one — memory. In place of the HDR-CX520V's 64GB capacity, the HDR-CX500V makes do with 32GB, which will net you around 115 minutes of video at the highest quality (or 13 hours in LP mode). A Memory Stick slot is also included for additional storage needs.

Personally, we feel that the reduction in memory is more than made up for by the reduction in price ($1799 vs. $1999). Provided you're disciplined enough to regularly backup your footage, the Sony HDR-CX500V represents the better deal.

As mentioned above, the Sony HDR-CX500V comes with its own GPS receiver. While there are no navigation options on board, the integrated mapping system allows you to view your current location on the LCD, which is bound to come in handy during holiday trips and the like. It can also organise your video clips based on the location they were shot at. While far from essential, the inclusion of a GPS sets the HDR-CX500V camcorder apart from its rivals while simultaneously upping the gadget's "cool factor". (While members of the opposite sex are unlikely to throw themselves at you, it should receive impressed comments from family and friends.) That said, we doubt many people will use it regularly.

While other camcorders, such as the Canon Legria HF S10, offer a maximum bit rate of up to 24 megabits per second, the Sony HDR-CX500V stubbornly sticks to 16Mbps. Despite this handicap, it remains a reliable and able performer. While we do prefer Canon's video quality overall, it's a pretty tight contest. Skin tones appeared natural under bright light, with plenty of detail in shadowed areas. Noise was also less problematic than we're used to. Naturally, the HDR-CX500V's three-way optical image stabiliser helps to reduce camera shake. In the hands of an experienced videographer, the difference is pretty marginal, but novice users should definitely notice an improvement.

Like the rest of Sony's handycam range, the HDR-CX500V sports a touch-screen LCD interface. This is something that really seems to divide consumers: you either love it or hate it with a passion. If you fall into the latter camp, the HDR-CX500V isn't going to change your mind — it's more or less identical to the models that preceded it. The menu's appearance and layout produce a similar sense of déjà vu. We've never had a problem with Sony's LCD touch screens, but based on the testimony of others, you may want to try before you buy!

The HDR-CX500V also offers an impressive 12-megapixel stills mode. This is achieved via interpolation (which is another word for cheating) but the results speak for themselves. Our test shots remained crisp and vibrant in all but the dimmest environments, while the inclusion of manual controls gives you plenty of photographic freedom. We also liked the smile shutter with "Face Touch". This tool allows you to select a subject on screen whose smile will then trigger the photo: kind of like an intelligent timer. If you’re looking for a camcorder that can double as a compact camera, the Sony HDR-CX500V is one of the better options on the market.