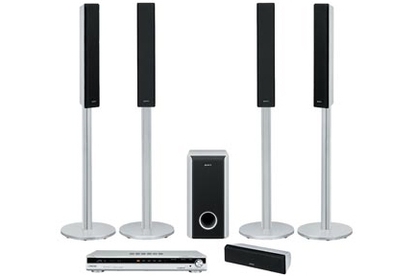 If you have HDMI capable devices at home and don't mind being without analogue connections, the Sony HTSF1000 might be a good choice, offering great sound and a stylish design.

One of the big buzzwords in home entertainment at the moment is HDMI; a form of media encoding that carries both digital video and audio signals through a single cable. No only does it offer the highest picture and sound quality, but it greatly simplifies the setup process. It's no surprise then that Sony's new range of home theatre systems is focusing heavily on this medium. The HTSF1000 is a slim, modern looking package that offers great sound quality while having the dubious honour of being entirely HDMI based. But although HDMI has several strong benefits including less cable clutter and superior video, sticking strictly to a single connection type does have its downfalls.

The major problem is that a lot of consumers don't have HDMI compatible devices yet, and even if they do some components will still be unsuitable. Games consoles for example only come sporting analogue connections; even the next generation Xbox 360 still operates via component (although a HDMI connection is due for this system shortly). Furthermore, only the new generation flat panel televisions carry HDMI ports, so many people will find themselves out of luck with this product. It is clearly targeted at the early adopters market and so it will be unsuitable for some people, but for those who want the latest and greatest, having a fully digital home theatre package is the logical next step.

The HTSF1000 carries two HDMI inputs and a single output, which seems a little bare at first glance, especially when you consider the system doesn't come with a DVD player. Realistically most people will be connecting their own DVD player and maybe a PVR to the system, but in the future, as the number of HDMI devices grows, you may need space for a set top box, games console, media centre or any number of other components - so an extra input would have been appreciated. Despite lacking other video inputs there are several choices for audio, including three analogue ports and both optical and co-axial support.

After using the system for more than a few minutes you will quickly understand why HDMI is such a selling point. This system delivers great quality across both audio and video streams. Our DVDs were crisp and suffered less aliasing and loss of detail than we typically see on an analogue connection.

Audio was where this system really shone. We found the tonal balance perfect for DVD watching. The deceptively small subwoofer offered just the right level of crunching bass that gave our movies a great, visceral feel. Surround audio was well rendered, as highlighted by our test scenes from The Matrix. You could hear individual ammunition shells falling all around you, mixed in with water droplets and chipped granite. There was a good level of differentiation between sounds and they were well positioned. For movies, this is one of the best systems we've heard in recent months.

The HTSF1000 didn't perform quite as strongly in our music tests, but it was still above average. Generally movies require a different sound to music, and so those that excel in one area are weaker in another; this system was no exception. The powerful and very prominent bass tended to overshadow the music a little, giving it a dark sound. The highs lacked a little of the extension we're used to hearing, and while the differentiation between musical elements was very good, we felt a little clarity was lacking. The bass heavy sound is most suited to rap, hip hop and electronic music.

It comes with all the usual features and support, including Prologic, Prologic II, Dolby Digital and DTS. There are several sound fields for music listening, such as Jazz and Orchestra, as well as Sony's Cinema mode. We found these made a difference to the audio, but for the most part we preferred the default sound.

The unit looks quite sleek and modern, with a silver and black motif. The speakers are tall and thin rather than chunky like some other Sony home theatres we've seen recently and the whole package will take up minimal space if you position things correctly.