With its bundled external microphone and exceptional image quality, the Sony HXR-MC50E camcorder is a reliable, all-in-one package that doesn't skimp on extras features. Professional videographers may require something a bit meatier though.

The Sony HXR-MC50E is a Full HD AVCHD camcorder with 64GB of embedded flash memory. Boasting an external stereo microphone, a proprietary lens attachment and a 12-megapixel CMOS R sensor, it can be viewed as an attempt to the bridge the gap between the consumer and prosumer markets. In fact, Sony is marketing the HXR-MC50E as a 'professional camcorder' — but with no dedicated focus ring or XLR audio inputs, we think this is a bit of a stretch.

With that caveat in mind, the Sony HXR-MC50E remains one of the best video cameras on the market. It strikes a great balance between ease of use and advanced features; everything from image quality to manual focus is pretty top-notch. Whether you require a simple point-and-shoot camcorder or something with plenty of hands-on features, the Sony HXR-MC50E will deliver the goods.

In terms of design, the Sony HXR-MC50E is virtually indistinguishable from Sony's consumer-level handycams such as the Sony HDR-XR550 and Sony HDR-CX550. In fact, its specifications are also surprisingly similar. All three camcorder models sport the same 1/2.9in CMOS R sensor, 12-megapixel stills image mode, 37mm wide-angle G lens and 10x optical zoom. Even the HDR-XR550's manual control dial remains unchanged (we would have loved to see a proper focus and zoom ring, but it wasn't to be).

What sets the Sony HXR-MC50E apart from its cheaper stablemates are the bundled accessories it comes with — namely, an external stereo microphone, a long-life battery pack and a proprietary lens attachment. The camera body has also received a subtle redesign, but the differences are pretty minor.

That said, the Sony HXR-MC50E is still suitably professional-looking for a high-end camcorder. With dimensions of 85x74x176mm and weighing 470g, it has a reassuring, chunky feel. Mind you, it's still tiny compared to other camcorders in Sony's prosumer range, such as the bazooka-sized HDR-FX1000. When it comes to size, we think it strikes a fairly good balance. 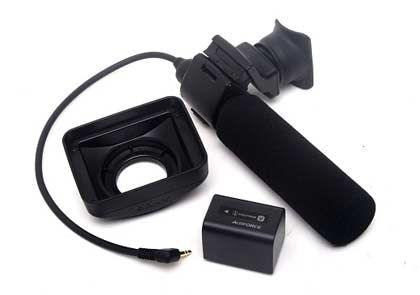 The Sony HXR-MC50E comes with 64GB of inbuilt flash memory, which is enough for around six hours of Full HD video (this can be extended to 48 hours in standard-definition mode). Sony has also provided a memory card slot that is compatible with both Memory Sticks and SDHC cards. This boosts the potential memory to 128GB.

Like its consumer-level HD stablemates, the Sony HXR-MC50E comes with an inbuilt GPS receiver. The integrated mapping system lets you view your current location on a basic 2D map. It will also organise your video clips based on the locations where they were shot (handy for cross-country road trips and the like). Personally, we think this feature is a bit misplaced on the Sony HXR-MC50E: it just feels too 'consumery' if there's such a word. [There isn't. — Ed.]

Serious videographers may also turn their nose up at the HXR-MC50E's touchscreen interface — but they would be wrong to do so. It does a great job of adjusting focus and exposure, with a quick tap on the 3.5in display making incremental changes to the selected portion of the frame. The end result is surprisingly smooth and natural.

To test the Sony HXR-MC50E professional camcorder, we shot footage in a variety of lighting conditions before playing it back on a Pioneer KURO PDP-C509A plasma TV . As expected, the Sony HXR-MC50E's video output was every bit as stellar as the HDR-XR550: one of our favourite camcorders of 2009. Both models produced exceptionally detailed video that excelled in dim lighting, with image noise only cropping up in the darkest environments. 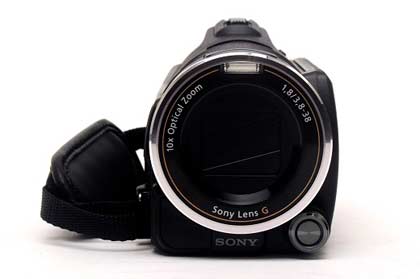 Special mention must also go to the optical image stabiliser's Active mode, which produced smooth, steady video — even at full zoom. All in all, the Sony HXR-MC50E's video performance ticks all the essential boxes.

The camcorder handled well during testing, with all major controls within easy reach of the fingers. We especially liked the manual control dial, which makes a welcome return from the HDR-XR550. This can be used to control a host of modes and features, including aperture, shutter speed, zoom, focus and white balance. It is surprisingly effective for such a small dial, although people with thick fingers may struggle a little.

Point-and-shoot fans need not fret either: the camcorder's Intelligent Auto mode is among the best we've encountered. Coupled with the intuitive touchscreen menu, this makes the Sony HXR-MC50E one of the most beginner-friendly high-end camcorders on the market.

In addition to taking great video, the Sony HXR-MC50E comes with an impressive 12-megapixel stills mode (via interpolation software). Our test shots remained crisp and vibrant in all but the dimmest environments, while the inclusion of manual controls gives you plenty of photographic freedom. If you'd like to use your photos for more than the obligatory Facebook updates, the Sony HXR-MC50E is a rock-solid option. 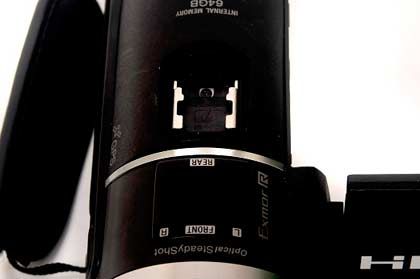 For a camcorder that touts itself as professional, the Sony HXR-MC50E is surprisingly lacking on the audio front (bundled microphone withstanding). As mentioned, there are no XLR connections; which is perhaps understandable given the camcorder's size. Less forgivable, however, is the lack of manual options. Audio level control is limited to just two options; 'normal' and 'low', with no dials to manually adjust. Thankfully, the inbuilt 5.1ch microphone and bundled microphone accessory do a decent job of altering audio levels on the fly.

In conclusion, the Sony HXR-MC50E can be viewed as the perfect introduction to serious videography. Both user-friendly and feature-packed, it offers the best aspects of both the consumer and professional markets. On the downside, its price is rather restricting.