Outstanding level design and all around addictive gameplay are just two of the highlights of LocoRoco 2, Sony's follow-up to the charming and upbeat original. 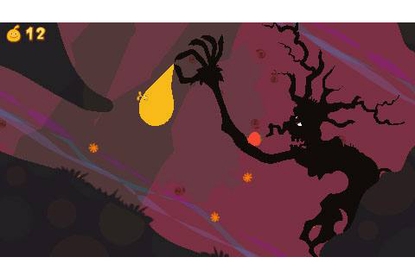 LocoRoco 2's fantastic level designs, addicting mini-games and gameplay left a smile on my face a mile long. The fact that it's budget priced is another reason to smile.

At first glance, it would appear that not much has changed in the colorful and curious world of LocoRoco. The mischievous Mojas are back to their old tricks and it's up to the titular gelatinous blobs to restore peace to their distressed planet. Throughout the duration of LocoRoco 2, you'll roll, bounce, slide and grow through a wide assortment of brand new, expertly crafted levels. While these stages may look like the original LocoRoco on the outside, fine-tuned physics are met with outstandingly clever ideas for some of the most unique and fun-filled stages to date. Even with all of the inherent charm found in the title, I was a bit bummed to see so much content recycled from the original LocoRoco. In fact, LocoRoco 2 borrows so much from the original that after playing through the first few hours of the game, I was just about ready to dismiss it as glorified expansion of the first LocoRoco. But the more I played, the game's distinctive charm really drew me in and I realised that this was more than a simple re-hash--it was a brand new experience altogether.

LocoRoco 2 has some of the most cleverly-mapped levels I've seen in a game since LittleBigPlanet, with vibrant surroundings and eye-catching visuals. Your LocoRocos will brave wild jungle levels, slippery mountain-tops, and new to the second installment, stages set completely underwater. No matter your surroundings, LocoRoco 2 finds a way to make each beautifully animated environment feel new and different with each time around. There are also dozens of unique routes for you to take in order to collect every MuiMui or Pickorie each stage has to offer, which really ups the replayability.

Also new to the world of LocoRoco 2 are musical notes which can be attained through interacting with your environments, meeting certain level-based expectations, or by participating in rhythm-based mini-games. Upon collecting 100 notes you can Level-Up your surroundings, making it easier to grab collectables or even make your LocoRocos more responsive with quicker turns and longer jumps.

I should note that the game can get incredibly frustrating, with puzzles that are demanding and will require multiple retries. The boss fights, however, are just the opposite: they're rather easy. Thankfully, boss fights are few and far between; it's just the teeth-grating task of getting there that can really set you off. Still, with its quirky presentation and interesting gameplay, LocoRoco 2 makes some fantastic improvements over its short-but-sweet precursor that should attract fans of the series and newcomers alike. It's often times frustrating and rather nonsensical but it's an absolute blast anyway. Pick it up and let the good times roll!