Sony’s newest NEX camera is technically brilliant, but its controls and menus need some refinement The next step in Sony's evolution of its NEX interchangeable-lens-but-no-bulky-internal-mirror camera system is technically brilliant: an amazingly detailed and clean image sensor shoehorned into a reasonably compact camera body that's incredibly well built and full of features (an excellent electronic viewfinder, tilting screen, plenty of dials for manual control). Using the camera in either its automatic or manual modes isn't as effortless as it should be, though, with some annoying quirks that hamper easy usage. We think they'd mostly be easy to address in a future firmware update, though.

The Sony NEX-7 has an interesting lineage: it’s the top model in the second generation of Sony’s NEX interchangeable lens camera system, a group of cameras focused on good image quality without the bulky controls and steep learning curve of a digital SLR. The NEX-7 has eschewed the light-on-buttons mentality of the previous NEX-5 and NEX-3 models, though, with three multipurpose control dials and a range of dedicated buttons. We think the controls theoretically make the NEX-7 easier to use in manual mode than older models, but the coming-together of the camera’s interface and hands-on controls needs some more work.

The NEX-7 is very roughly a ‘rangefinder’-style camera, with an optical viewfinder that is offset from the camera lens mount. Since it’s an electronic viewfinder, there’s no need for a bulky mirror box and optical prism of the kind you’d find in a digital SLR. The body of the camera is extremely well constructed, easily on par with a semi-professional digital SLR like the Nikon D7000: it’s milled from solid aluminium for the most part, and the rubber and plastic inserts are of high quality.

The vaguely rectangular shape of the NEX-7’s rear panel lends itself to an easily recognisable layout of controls. Below the viewfinder is the NEX-7’s tilting 3.0in LCD screen, which can pivot up and down to allow shooting from the hip or with the camera in the air. Look right from the viewfinder and you’ll see a flash pop-up button, playback button and auto-exposure/autofocus switch-button combo, with a dedicated movie button on the camera’s thumb grip. Down from there are two context-sensitive buttons, and a scroll wheel with a central button and four-way directional pad built in.

The top of the camera is where innovation is hidden away. A multipurpose hot-shoe and pop-up flash sit next to two knurled aluminium dials extending from the top rear of the camera — these are the crucial components in the Sony NEX-7’s manual control layout. The power switch is built around the shutter button, and there’s a third multipurpose button alongside it.

The electronic viewfinder in the Sony NEX-7 is excellent. It’s by far the closest approximation we’ve seen to a full-size SLR optical viewfinder, and being an OLED panel it suffers from few of the frustrating inadequacies of the LCD-based electronic viewfinders found in the Panasonic G3, Sony Alpha A35, Samsung NX11 and similar cameras. Its clarity and detail levels are excellent with a 2,359,296 dot resolution — count ‘em — and there’s little to no loss of detail in dark or bright areas in the majority of shooting. 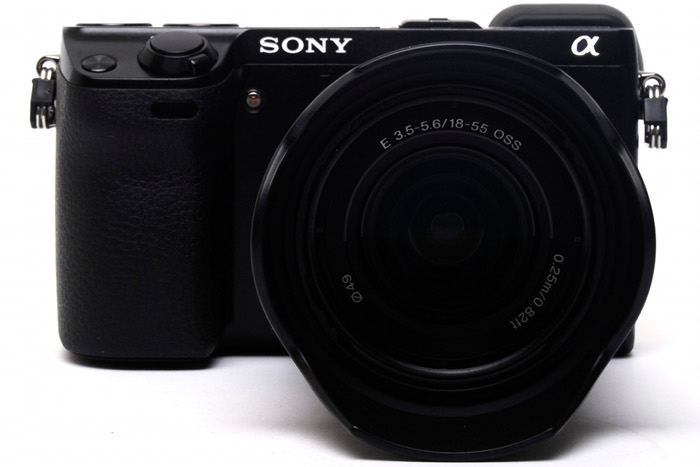 There’s a sensor that switches to the EVF once you raise it to your eye, making the experience almost seamless — we only found it an issue when we accidentally covered it with a thumb during browsing images on the rear screen, blacking out the LCD temporarily until we realised. It’s also important to note that the eye-cup around the electronic viewfinder is quite large — larger than the Sony product photos make it out to be — and it extends some way from the rear of the camera. We found that if the diopter setting was correctly adjusted, we preferred to shoot the camera with the eye-cup detached.

The extra controls on the NEX-7 over previous models go a long way to make the camera easier to use in manual shooting modes. The two top-mounted multipurpose dials are best used for independently adjusting shutter speeds and aperture values in Manual mode, but will both work if you’re browsing through stored photos or if you’re in a more automatic shooting mode.

Next page: Image quality and performance