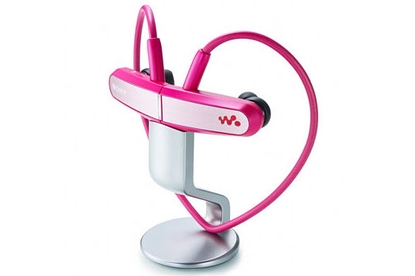 Sony’s NWZ-W202 MP3 player uses a combination of the novel Zappin shuffle technology and a unique form factor to set it apart from the crowd. While this approach may gain some fans, it also alienates those who want to use different earphones or who want more control over their music.

The Sony NWZ-W202 is a 2GB flash-based MP3 player with integrated earphones and an all-in-one design. It will suit people who want to be free of dangling headphone cords, but users are restricted to the built-in earphones.

The MP3 player has a decidedly futuristic look; it looks like love-child of a pair of earphones and a Bluetooth headset. The two halves of the Sony NWZ-W202's body are designed to nestle against your ears. It uses EX monitor&#8211;style headphones (as employed on the Sony MDRAS100W). The headphones are supported by a sturdy cord, which also connects the two halves.

This system generally works well, but it relies on the earphones being comfortable for all users. Three sets of silicone tips are provided to suit a range of ears, but the weight of the Sony NWZ-W202 will be fatiguing when worn for a significant length of time. The headphones resist small movements, but we wouldn’t recommend them for jogging or high intensity sports. They’re also quite bulky and, let’s be honest, you might look like a dork.

All of the player’s controls are situated on the right half, with a jog dial responsible for power, play/pause and track skipping. A volume control is the only other button on the earpiece. The system is easy to navigate and the Zappin song selection system works well. You activate it by holding down the jog dial and it plays a few seconds of each song so you can choose what to listen to. We had no problems navigating through 2GB of music files using the system. There is a shuffle switch on the inside edge of the earpiece.

The integrated Sony headphones are decent but not brilliant. We did notice some distortion at the highest volume level — which isn’t particularly high — while treble response is slightly weaker and more recessed than we would have liked. Mid-range and bass are well represented, though, making the Sony NWZ-W202 a good choice for fans of drum 'n' bass or hip-hop.

If you’re looking for an MP3 player/headphone combination that frees you of cords and is easy to use, the Sony NWZ-W202 is a reasonable choice. Obviously some amount of fashion confidence is necessary — especially with the more lurid green, pink and yellow models — but if you’re willing to take the risk, there’s little to fault if you approve of the all-in-one design.