Priced right, the PS3 Slim bundles the top-notch features of its predecessor into a smarter, sleeker package. 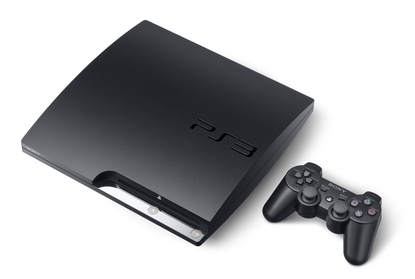 With its slicker body and reduced price point, the PlayStation 3 Slim is vastly more enticing than its costly predecessor. As Blu-ray players go, it's pretty hard to beat -- and that's before you even factor in the games. If Microsoft claims it's not worried by the new PS3, it needs to take a closer look. One thing's for sure: the console race just got interesting.

Sony's remodeled PlayStation 3 (120GB) dropped a couple of dress sizes and $200 off the price of its predecessor, the original PlayStation 3. For $499, you can now have a first-class, BD-Live capable Blu-ray player with 1080p HDMI output, integrated Bluetooth and 802.11g, an upgradeable 120GB hard drive, Gigabit Ethernet, 7.1-channel Dolby Digital audio support, and Sony's monstrously powerful custom multiprocessing CPUs. Oh, and it plays PlayStation 3 games, too.

The most significant internal change is that switch from an 80GB hard drive to a 120GB unit. On its exterior, the PS3 (120GB) replaces the original version's glossy black paintjob with a duller black matte finish, and it smooths out its predecessor's design angles. Fingerprints still show if your hands are oily, but far less than before. Our hefting, shaking, and squeezing of the unit led us to conclude that it was just as solid as the original.

The PlayStation 3 (120GB) — a.k.a. the PS3 Slim — weighs 3.2kg and measures 325x98x274mm. Those specs indicate that the new model is roughly 33 per cent smaller and 36 per cent lighter than the original; but because it's a hair deeper, it will continue to occupy about as much space as a standard rack-style DVD or Blu-ray player.

Though the Slim retains most features from the original system, Sony has altered a few things. Instead of the original model's four USB ports, the Slim settles for two — an unfortunate limitation when you try to play Guitar Hero or Rock Band with more than two wire-based peripherals (microphone, guitar, drums) or when you want to run an external hard drive (or three) while charging two controllers. A powered USB hub solves the problem, but at extra cost and at the loss of a power outlet.

In the box, Sony supplies the same peripherals that came with the original PS3: a composite A/V input and a DualShock 3 wireless controller with a mini-USB-to-standard-USB charge cable. The system's power cable replaces the three-prong connector with an older two-prong plug similar to the connection on the back of a PlayStation 2. Regrettably, the PS3 PS3 Slim doesn't bundle an HDMI cable. You can choose to pay Sony's exorbitant "official" HDMI cable price (around $60), or you can drop by an online reseller and find a functionally identical cable for a lot less.

If you own a Sony Bravia-brand TV and plan to use HDMI, Sony touts a new sync feature that ostensibly lets you control the PS3's XMB (cross media bar) interface with your TV remote. We tested this option on a Sony Bravia KDL52Z5500, which is supposed to support it, but we couldn't get it to work. The TV indicated that it recognised the console in the HDMI setup (you enable the feature on both your TV and the PlayStation), but it refused to acknowledge our attempts to move the cursor around in the XMB interface itself. On the other hand, the PS3 Slim did power off automatically when the TV shut down, in keeping with the Bravia Sync's System Standby feature. You can control movies with the wireless gamepad, but for dedicated button access to multimedia features, you'll want Sony's PS3 remote (sold separately).

The PS3 Slim maintains the original PS3's backward compatibility with PlayStation 1 games, but like the original PS3 it won't handle PlayStation 2 games (of which there are many) — a feature that Sony now says is off the table entirely. PlayStation buffs unwilling to retire their PS2 games will have to soldier on with both units occupying their A/V cabinets and taking up input space on the rear of their TVs.

Also absent is any option to install an alternative operating system like Linux. Most gamers and home theatre buffs probably weren't aware that the original PS3 could accommodate such OSs, however.

Like the original, the PS3 Slim can stand horizontally or vertically, though you'll want the optional stand if you plan to go with a vertical orientation. The new model's rounded casing and slight main-body overhang make it even easier to tip over than the PlayStation 2. When laid out flat, it takes up less room than its predecessor, but it still won't fit comfortably next to an LCD TV on an average-size A/V stand.

Loading a Blu-ray game or video disc takes about 10 seconds from the instant the mechanism grips it to the moment the disc icon appears on the XMB — about the same as the original. Otherwise, Blu-ray playback remains unchanged from how it worked on previous iterations of the PlayStation 3.

The disc drive itself is whisper-quiet in action. We popped in Metal Gear Solid 4, ran a clean install, and couldn't hear the sound of the drive spinning at all. The noise that the drive makes when loading and ejecting discs is definitely louder, however — and not just because everything else is so much quieter.

On our test unit, the fan emitted a barely audible hum, somewhere in the G-above-middle-C frequency range. We cued Metal Gear Solid 4's introductory briefing — a surefire processor-cruncher — and in a silent room, the Slim was significantly quieter than our MacBook Air (with the latter's fan spinning at moderate speeds). Sony's inclusion of a larger 95mm fan with 17 blades and a brushless DC motor allows the system to move more air at lower fan speeds and, therefore, with less machine noise.

Despite the drop in processor size from 65nm to 45nm and the consequent reduction in power consumption (from 110W to 73W, on average), the PS3 Slim feels warmer than the original. For this slimmer model, Sony designed the custom plastic molding to route air away from the heatsink; thus the entire chassis tends to feel warm (though never hot) to the touch. Still, if you're planning to run the PS3 Slim in close quarters with other warm electronic gear, you'll want to rethink your setup.

As Blu-ray players go, the original PS3 was competitive at $700 — although some cheaper units did just as good a job. At $499 with a slimmer profile and lower power consumption, the PS3 Slim is arguably the one to beat. Factor in games, social-networking features like PlayStation Home, music and custom video playback, Web surfing, and picture browsing, and this may be the best-value Sony game system yet.