When it comes to pure performance, the PlayStation Vita is the best dedicated handheld gaming console you can buy.

When the Sony PlayStation Vita arrives in North America on February 22nd, it'll face stiff competition. Mobile devices like smartphones and tablets have become powerful, cheap and ubiquitous. And with great, inexpensive games readily available on a device that you're already carrying every day, is there any reason to spend upwards of $250 on a piece of dedicated gaming hardware like the PlayStation Vita?

I didn’t think so, until I spent some quality time with the PlayStation Vita. Let me tell you why it changed my mind.

At just over 7-inches wide and 3-inches tall, it’s impossible for anyone to mistake the PlayStation Vita for anything other than a handheld gaming machine. Despite its size the device is actually surprisingly light, thanks to a reinforced plastic chassis that’s difficult to bend or flex. It feels solid, and is comfortable to hold for extended play sessions. Our 3G-capable Vita ($300 at time of review) clocked in at just under 10 ounces, making it comfortable for daily carry.The $250 Wi-Fi-only model is lighter still, at 9 oz.

Despite its sleek profile and light weight you’ll likely want to avoid slipping the Vita into your pocket, thanks to the twin analog thumbsticks flanking the 5-inch OLED screen. They jut out about half an inch from the front of the device. Having access to two thumbsticks for analog control (as opposed to the squat Nintendo 3DS Circle Pad, or the flat analog nub on the Sony PSP) makes it possible for Vita developers to publish 3D games with complex controls. But the hardware itself is unwieldy. Unless you purchase a protective sleeve for the Vita (sold separately) you’ll want to carry the device in a purse or satchel to avoid potential damage to the thumbsticks.

The Vita sports plenty of other input options, including a directional pad, four face buttons, Start and Select buttons, and a PlayStation button that you can tap at any time to jump back to the Vita Home screen. Inside the Vita are a triple-axis accelerometer and gyroscope and a triple-axis electronic compass, along with a GPS radio (in 3G-enabled Vita units only). Along the top of the chassis you’ll find left and right trigger buttons flanking volume controls on the right and the power button on the left, as well as two flimsy plastic covers in the middle that conceal a slot for your Vita cards (more on those later) and a mysterious “Accessories Terminal” for connecting peripheral devices, none of which were announced at time of publication. In addition, 3G Vita owners will find their SIM card slot nestled on the left side of the unit beneath a black plastic cover.

Rounding out the unit are a headphone/microphone jack, a “multiuse connector” port and memory card slot along the bottom of the chassis. The multiuse connector port resembles nothing so much as a malformed USB jack, and as of publication it’s only use was as a port for plugging in the PlayStation Vita proprietary charger. The charger itself comes in three parts: a generic North American 2-pin power cord, a Playstation-branded USB cable with a proprietary pin configuration that matches the Vita’s multiuse connector port, and an AC adapter with a USB port to unite the two. It’s a bit much to carry just to keep your Vita charged, but you can use the Vita-to-USB cable to connect the device directly to your PC. From there you can transfer photos, movies, music and applications between the Vita and your PC via the PlayStation Content Manager Assistant application (more on that later) or trickle charge the Vita’s battery via USB (as long as the Vita is not in active use).

But enough about ports, let’s talk about the screen. The capacitive 5-inch OLED touchscreen that dominates the Vita is big, beautiful and multitouch-capable. It’s bright enough that most games and movies are playable even in direct sunlight. The excellent viewing angle makes it easy to see what’s going on even at extreme angles, and the glossy finish doesn’t pick up fingerprints or smudge easily. With a resolution of 960-by-544 pixels it’s not quite as sharp as an iPhone 4S display, but it’s the best screen we’ve ever seen in a dedicated gaming handheld (trumping both the Nintendo 3DS and the PSP) and colorful games like Lumines and WipeOut 2048 look fantastic. 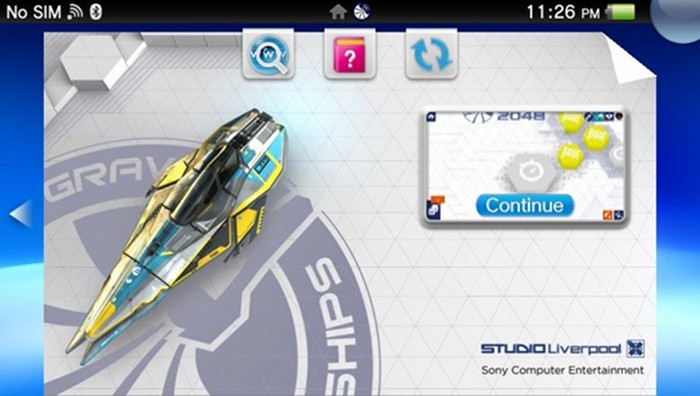 Mirroring the multitouch-capable touchscreen is a similarly-sized glossy touchpad on the back of the device. This is the first time we’ve seen a mobile device with a rear touchpad since the Motorola Backflip, and learning to hold the Vita comfortably without accidentally tapping the rear touchpad takes some time. Thankfully it’s simple enough to feel where the Vita chassis ends and the touchscreen begins via a texture change between the rough plastic of the chassis and the smooth, glossy touchpad. How well the complimentary front and rear touch interfaces function depends on which game you’re playing; as an example, while playing the twin-stick shooter Super StarDust Delta you can tap and drag your finger along the rear touchpad to place gravity wells, or tap the front touchscreen to target your missiles. If you don’t like the touchscreen controls, you can always use physical buttons instead.