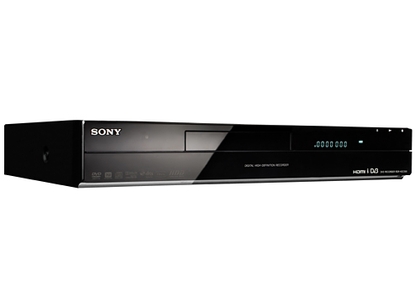 The Sony RDR-HDC300 HDD/DVD recorder boasts an intuitive user interface with plenty of codec support. On the downside, its recording functionality could definitely do with some improvement.

The Sony RDR-HDC300 is a high-definition HDD/DVD recorder with a 320GB hard drive. It slots in-between the Sony RDR-HDC 100 (120GB) and Sony RDR-HDC500 (500GB) in the company's PVR line-up. Apart from hard drive capacity, all three models are essentially the same.

[Compre the Sony RDR-HDC300 to other PVRs and DVD recorders on PC World.]

Like the rest of Sony's PVR range, the RDR-HDC300 HDD/DVD recorder suffers from limited recording functionality (a problem we'll discuss in detail later in this review). However, it still comes packed with plenty of useful features, including the ability to pause live TV. Other highlights include 1080p upscaling (via HDMI), a USB port for media playback, a DTS Digital output, DivX support and an MP3 jukebox mode. While it would have been nice to see proper Blu-ray support instead of just upscaling, it remains an acceptable personal video recorder for the asking price.

With dimensions of 430x72x258mm and weighing over 4kg, the Sony RDR-HDC300 HDD/DVD recorder is a rather hefty looking device. If you already have a Blu-ray player and video game console taking up shelf space, this device could be pretty tough to squeeze into your home entertainment rig. On the plus side, the glossy black finish and simple LED display are sure to fit in aesthetically with the rest of your home theatre setup.

In addition to basic playback buttons, the Sony RDR-HDC300’s front panel features S-Video, a MiniDV input, composite video and a USB port. This is very handy if you plan to regularly connect camcorders and other devices to the PVR for recording purposes. The rest of the ports are located at the rear; including HDMI, component AV, coaxial digital audio and three sets of composite AV ports (via the included SCART adaptors). Wi-Fi and Ethernet are both absent, which unfortunately means you cannot stream content from your home network.

Equipped with a HD digital tuner, the Sony RDR-HDC300 can capture television broadcasts in their native resolution; including HD content. Setting up the device was exceptionally simple thanks to a beginner-friendly wizard and highly intuitive interface. In our tests we had all our TV channels stored and were scheduling recordings with the One Touch Timer in no time at all.

However, Sony has made a serious oversight when it comes to the TV tuner. Most dedicated PVRs — such as the Panasonic DMR-XW450 and Foxtel iQ2 — boast two or more HD digital tuners, allowing you to record two television channels simultaneously. By contrast, the Sony RDR-HDC300 comes with a single DVB-T tuner (which also doubles as an analog terrestrial tuner). This severely limits your choices when it comes to recording TV.

The DVD recording options are also limited. We couldn’t get the RDR-HDC300 to record external content to disc — instead, you need to use the hard drive first and then transfer your recordings to DVD. To make matters worse, this can only be done in real time (i.e. there are no fast dubbing options).

On the plus side, the HDD records content reliably and can store over 500 hours of recordings. The DVD player also produced excellent looking video, with decent HD upscaling. We tested the device on a Pioneer KURO PDP-C509A plasma TV using an HDMI cable and were more than satisfied with the results. Nonetheless, we can't help but feel that there are cheaper and better options on the market.