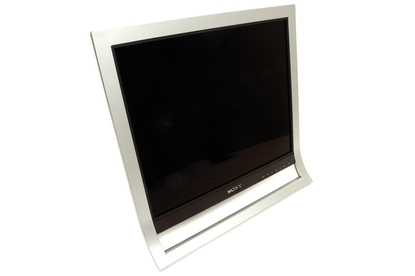 This monitor didn’t fare too well in our tests for motion blurring and it also struggled slightly in the colour tests. It did have the best viewing angles in the review though, as well as the best aesthetics, but these features aren’t enough to justify its high price tag. We expected much better overall performance for this price.

This expensive monitor demonstrates the most intricate industrial design - it doesn't have a neck. Instead, the front bezel, which is 3cm wide across the top and along the sides, extends all the way down to the desk, where it curves forward slightly and acts as the base for the screen.

This monitor also has an anti-glare coating. It's a thin film that makes up part of Sony's Clear Bright technology to boost the contrast ratio of the screen as well as improve the viewing angle. This is perhaps how Sony is able to claim a contrast ratio of 1000:1 with this unit. Its contrast was indeed excellent in our office.

Likewise, the wide viewing range of the screen was the best in the round-up. We were able to view the screen exceptionally well from the side and rom the top without noticing much degradation in colour and brightness. This is due to the MVA technology that the panel incorporates.

This monitor has a speed of 12ms, which makes it one of the quicker models in the round-up. However, we noticed significant trailing around the edges of the text in our motion blue tests, particularly with black text on a white background, while white text on a black background failed to remain white as it moved across the screen.

Testing with DisplayMate showed that this monitor may also struggle to display colour gradations properly. This was particularly evident in the 256-level colour intensity tests, where colour banding was clearly visible. So, if you want a monitor for intense graphics work, you may wish to look for a model with a 16.7 million colour rating. Nevertheless, we found this screen vibrant for everyday usage and especially for movie watching.