A 16.4in VAIO laptop that ships with Adobe Photoshop and Premiere Elements 8.0 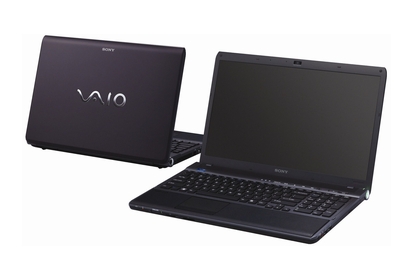 Sony's VAIO F Series has plenty of grunt under the hood and lots of style all round. Its Full HD screen is bright and vibrant and handles fine colour gradations very well. It's perfect for photographers, designers and videographers who require a professional laptop for their work. However, we're not fans of all of the notebook's preinstalled VAIO software, and we also wish it had a faster hard drive.

The Sony VAIO F Series notebook is pitched at designers, artists, photographers and video editors who want a stylish notebook that has lots of speed and plenty of built-in features. You get a big, Full HD screen, a Core i7 CPU, 8GB of RAM, lots of hard drive space and preinstalled Adobe software. However, you do have to pay a premium price for it all.

The VAIO F Series' design is stylish, sturdy and feels good to the touch. The palm rest has a leather texture that makes typing a joy; meanwhile, the chiclet-style keys have good bounce-back and are comfortable to hit. There is a number pad as well as dedicated media control buttons, and they've all got ample space dedicated to them — it really is a well laid out notebook in terms of key placement.

Of course, the good key layout has been easy to implement thanks to the amount of space available on the VAIO F Series' chassis. At 16.4in, the notebook is a bona fide desktop replacement, but that's not to say that it can't be used on your lap. It weighs about 2.9kg, but when it rests on your lap the weight is spread so that it doesn't really feel uncomfortable. It gets only slightly warm at the front if you're not using it for any demanding tasks, but if you block its underside air vent and use all four cores and eight threads of the CPU to their full potential while reclining in an armchair, you're bound to feel the heat.

The notebook's battery won't last too long away from an outlet, so you'll want to make sure there's one near your armchair! In our rundown test, in which we disable power management, enable Wi-Fi, maximise brightness and loop an Xvid-encoded video, it lasted only 1hr 25min, but that's expected for such a big and powerful notebook.

There is quite a strong cooling system in the F Series, which helps keep the Intel Core i7 CPU, NVIDIA GeForce graphics card and 500GB hard drive cool. It gets loud when the CPU is doing hard work, to the point where you can hear it from across the room — even a large one such as our Test Centre. You can expect big things from the VAIO F Series' configuration. Our particular configuration isn't available to purchase (we looked at a preproduction model with 6GB DDR3 SDRAM and a 500GB, 5400rpm hard drive), you'll be able to purchase the VPCF127HG with a 1.73GHz Core i7-740QM CPU under the hood (it can get up to 2.93GHz using Intel's Turbo Boost), as well as 8GB of DDR3 SDRAM, a 640GB, 5400rpm hard drive, and a GeForce GT 330M graphics adapter.

In our performance tests, our preproduction F Series produced a mishmash of results. It recorded a time of 47sec in our Blender 3D rendering test, which is a good result, but it recorded a sluggish time of 1min 31sec in our iTunes MP3 encoding test. The hard drive's average transfer speed of 23.29 megabytes per second is also very slow for a notebook with a $3000 price tag — by way of comparison, the Toshiba Qosmio F60 also recorded a speed of 23.29MBps, but cost only $1899 at the time of testing. From these results, the Blender test is the only one that indicates you are getting a fast machine and its speed in this benchmark is on par with one of the fastest notebooks we've seen to date, the ASUS G73jh.

But apart from the fast CPU, the cornerstone feature of the F Series is its 16.4in Full HD screen. It looked great in our tests and was capable of showing even the most subtle gradations in our reference photos. It's a great screen for editing photos and Sony even claims that it has 100 per cent Adobe RGB coverage. We can say that the screen looks vibrant and that it's very easy on the eyes. Part of this is due to the built-in ambient light sensor, which automatically adjusts the brightness of the screen according to the amount of light in your environment. This feature worked perfectly during our evaluation. Being a 1920x1080 screen, there is a lot of space for the mouse to cover, and the large touchpad (82x50mm) is set up to traverse that area in as little time as possible. In fact, it was a little too sensitive and quick in our tests and we had to adjust it.

While the notebook is well built, stylish, and capable of completing tasks quicker than many other laptops on the market, it's not perfect. It ships to the user with plenty of pre-installed software. Some of it is very useful — such as Adobe Photoshop and Premiere Elements 8.0, as well as Lightroom. However, you also get a lot of bloatware, such as the VAIO media centre software, which looks a lot like the PlayStation 3 interface. It is attached to background database services that can, at times, chew up to 35 per cent of the CPU and really make the notebook seem sluggish. However, as we looked at a preproduction model, this might not be the case in the production notebooks. Sony has also installed a dock application that appears when the mouse pointer hits the top of the screen. It can be very annoying if you accidentally hit the top of the screen while trying to minimise a window or access a menu, for example — if you keep the speed of the mouse pointer high, sometimes you overshoot the File menu in an application, which also brings up the dock.

Over $3000 is a lot to pay for a notebook these days, but you're not only getting high-end specifications with the VAIO F Series, you're also getting a notebook that has a brilliant screen, a well-designed and solid body and useful Adobe software. It's a machine that's ready to use straight out of the box, and you can use it for everything. Not only can you use it for work and creativity purposes, you can also play games on it (it recorded 6498 in 3DMark06), watch movies using its Blu-ray drive (which can also burn Blu-ray discs), and, if you stick a USB or ExpressCard/34-based digital TV tuner in its side, you can plug it into a big-screen TV via HDMI and turn it into a fully fledged media centre.

We just wish it had a 7200rpm hard drive rather than a 5400rpm drive, and that it had space for two drives in its chassis. We also wish it didn't come with so much preinstalled VAIO software. Sony means well, but all that software will do is annoy you and take up system resources.