The Sony VAIO S Series VPCSA25GG is for suit-wearing business users who want something that stands out. It's thin, it's light, it has USB 3.0 and other nice features, and it has good CPU and graphics performance. It could use an SSD and built-in 3G, and its hinge could be better, but overall we think it's a good unit.

If you want a good looking 13.3in laptop, something unisex that will definitely attract attention, the limited edition, bronze coloured Sony VAIO S Series VPCSA25GG (also known as the VAIO SA Series) is perfect. It's only available in bronze from the Sony Centre or from Sony Stores, with the black versions available in other outlets. Even in black though, we think the S Series is still desirable, and that's because it's a thin-and-light laptop that supplies good features and fast performance. It's far from a perfect laptop though and it also costs a lot.

The Sony VAIO S Series VPCSA25GG is an ultraportable that's primarily aimed at suit-wearing business users who want something to really show off. It's a little like the Toshiba Portege R830 in that it's a thin-and-light model with stacks of speed, and it's unlike the Apple MacBook Air with its sharp unibody design.

The VAIO is made from magnesium alloy and aluminium and it weighs just under 1.7kg. It has an overall thickness of 25mm (when the lid is closed) and it's very easy to carry to and from work on a daily basis and also comfortable to type on while sitting in your lap. Despite being so light and thin, it feels quite sturdy, even though there is a little bit of flex in the palmrest and the lid.

However, we did have an issue with the screen's hinge. Unless the screen was tilted back all the way, the hinge was not strong enough to stop the screen from sloping forward on its own. We hope this is something that isn't present on shipping versions of this laptop as it was really annoying.

A fan is present in the chassis, and there are also plenty of vent holes located underneath the unit. If you use the S Series on your lap and block these vents, then the laptop will get quite warm, but during general use on a flat surface, the unit will remain relatively cool. When the laptop is under a heavy load, its fan makes a lot of noise and you will definitely be bothered by it if you run CPU- or graphics-intensive tasks in a quiet room. The fan extracts air at the rear of the chassis, through a tiny gap between the chassis and the screen. It's similar to the design of the MacBook Air in this respect. The tiny gap accentuates the noise as the air has to squeeze quickly past such a small area. 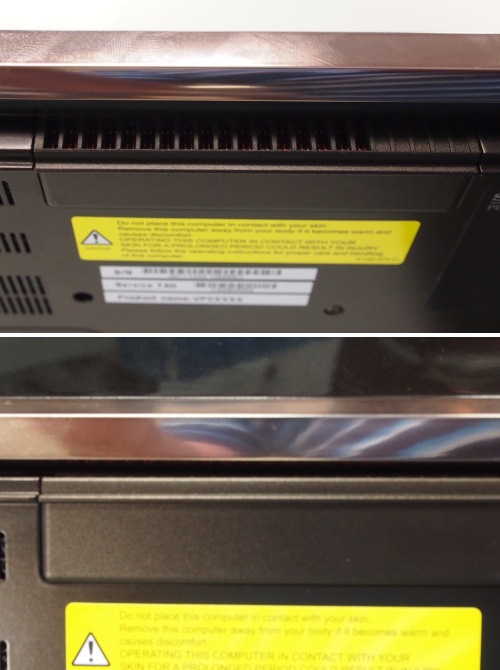 When the screen is tilted all the way back, a tiny gap remains for the fan to extract warm air from the chassis.

The bronze palmrest has a patterned texture that feels good to touch and it's comfortable to rest on for long periods of time. We love the chiclet keyboard, which has soft, full-sized keys that possess good travel. There aren't any keys in awkward positions and we love the fact that the arrow keys are not jammed into the bottom-right corner; they are given adequate space.

We like the large touchpad (it is 96x51mm in size), but we wish it used a better driver program. It doesn't support two-finger scrolling and its flick gesture requires two fingers rather than three. This won't be a problem if you're not already used to performing any gestures. We think that the left- and right-click buttons could also stand to be a little softer. 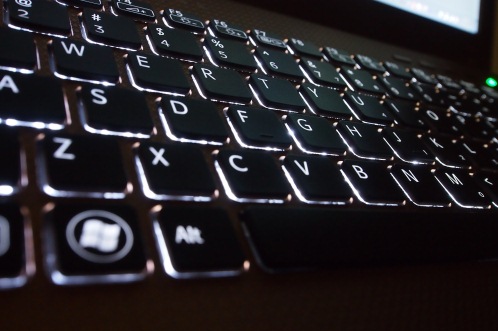 The backlit keyboard is easy on the eyes and can switch on automatically thanks to the inclusion of an ambient light sensor.

You'll also find some shortcut buttons above the keyboard: one brings up your default Web browser, one opens the VAIO media gallery application, another launches the VAIO Care support centre. An eject button for the DVD burner is located on the far left, just above the Esc key.

The screen has a native resolution of 1600x900 and it possesses good brightness and contrast. It has a non-reflective matte finish, but glare was still noticeable at times and we had we had to adjust the angle of the screen frequently to counter it.