Not exactly a notebook: a portable PC for the home 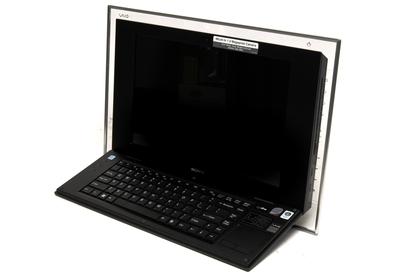 This unit's interesting design and user-friendly Sound FLOW package are let down by a lack of the latest ports.

The Sony Vaio VGC-LJ25GB is an interesting device that's stuck directly on the fence between notebooks and desktops. Its style is a mix of a desktop's form and a notebook's function — it's essentially an all-in-one PC that's designed to be used as a desktop. It has a handle and a battery, but these are mainly useful for transporting it from one room to another. Its keyboard is directly attached to the bottom of the screen and can be folded up when not in use.

The unit is designed for home use, with a focus on multimedia. Indeed, apart from its form factor, a key feature of the unit is Sound FLOW, which can be controlled by a series of touch-sensitive buttons on the right-hand side of the screen. Sound FLOW is an application for playing music that can be initiated by folding up the keyboard so that only the top part of the screen is visible. On the screen you can view information pertaining to any digital music or CDs that you're playing.

Although stylish and good in theory, the touch-sensitive buttons on the side of the screen are a little too sensitive and placed too close together: accidentally brushing against the front panel can activate several of the controls.

Although the design is a mix of desktop and notebook, the guts are purely the latter. A 2.1GHz Intel Core 2 Duo T8100 processor is accompanied by 2GB of DDR2 RAM, while a 5400rpm, 200GB Serial ATA drive provides storage.

Unlike its predecessor, the Sony VAIO VGO-LA38G, this unit doesn't feature an independent graphics card. Instead, it relies on an Intel X3100 integrated graphics controller, which isn't good for 3-D applications, as its meagre score of 556 in 3DMark06 attests. The VGC-LJ25GB has a 15.4in widescreen display with a native resolution of 1280x800, and it has wide viewing angles and bearable reflectivity.

In WorldBench 6, it recorded a score of 79. The score means that running typical office applications and multitasking can be accomplished with ease. However, graphics-intensive tasks such as 3-D rendering and intensive photo editing will take more time. In our iTunes test, where we convert 53min of WAV files into 192kbps MP3 files, the VGC-LJ25GB completed the task in 1min 21sec, which is a respectable time.

Overall, the unit is comfortable to use. Its keyboard is well-structured and effective, despite the keys being occasionally unresponsive with very little bounce. A small touchpad is integrated on the right-hand side of the keyboard and works well, although left-handed users may find it inconvenient.

The speakers on the unit are fantastic, given its size, and provide immersive sound for DVDs and music — heaven for users accustomed to the tinny reproductions of many notebooks. A dual-layer DVD burner comes in a slot, rather than a tray, format.

This unit doesn't have a HDMI connection, D-sub port, S-Video out port or a built-in TV tuner, despite the target audience being the home user. This is disappointing given the VGC-LJ25GB's price ($2799) and the fact that these points are of key importance for home entertainment.

The five USB 2.0 ports provided are enough for external peripherals and storage devices to be attached. A FireWire port is also present. For audio, you get a line-in port as well as an optical output connection, which is great for those with a compatible sound system. An ExpressCard/34 and a Type II PC Card slot are both present for expansion.

The VGC-LJ25GB can wirelessly network at the fastest speeds currently available thanks to 802.11 b/g/n capabilities, but the unit lacks Gigabit Ethernet and can connect to a LAN using only 10/100 Ethernet speeds A modem facilitates dial-up connectivity.