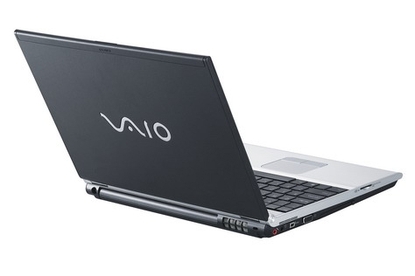 The Sony Vaio SZ15GP/B is a great entry level unit for people who want to get mobile but don't need a monster laptop.

If there is one thing Sony does right it's sleek, futuristic and sexy design. This is exemplified in their Vaio Notebook series and the VGN-SZ15GP/B is no exception. An achievement in design, it performs reasonably for an entry level notebook. It is not without its quirks but overall tends to perform consistently and of a caliber expected for a unit at this price point.

From a design standpoint it is a very sexy and superbly crafted piece of hardware with an attractive brushed aluminium internal chassis and a muted black, almost flush, keyboard. The speakers are well hidden within the chassis and the monitor bezel continues the same colour scheme with the black meeting at the top of the screen at a discreet in-built web cam. The exterior of the unit is a different matter with the entire body of the Vaio encased in a rugged, almost porous, black sandstone like finish. This gives the appearance that the unit is rather sturdy although how much punishment it could withstand is questionable.

The SZ is slightly thicker than most ultra-portable notebooks but is still lightweight and thin enough to comfortably carry under the arm or in a bag. The connections on the sides of the unit include two USB 2.0 ports a microphone and headphone port and an iS450 port. There is also the standard 15pin D-Sub connection and a DVD±RW drive. We found the eject switch for the DVD drive was uncomfortable to access but this was only a minor frustration. For all your card reading needs, Sony provide a card reading adapter which slides into an expansion port on the right facade. This supports xD, SD and MMC media cards but a built in memory stick Duo Pro"MagicGate" is also included for Sony's proprietary flash memory type.

The ultra-thin display is a 13.3 inch 1280x800 native resolution monitor and looks simply fantastic. Back lit with a single lamp, it is uniform in its light spread while remaining rather bright and avoiding any back-light bleeding. Both text and graphics looked highly detailed and the DisplayMate Video Edition tests we ran performed flawlessly with accurate colour reproduction. For an ultra-portable notebook the screen size is more than adequate and will be suitable for most productivity tasks.

This unit seems to be targeted toward use as a mobile creation studio or mobile office rather than hardcore PC use with a T2300 Intel Core Duo Processor running at 1.66 GHz and 512MB of RAM. The results of our performance tests tended to slant in favour of productivity over recreational usages. The Sony Vaio SZ scored an 80 in PC WorldBench 2005 and a 170 in MobileMark 2002. This is consistent with other low to mid range notebooks we have reviewed and will be more than enough for users wanting to take their office on the road. For gamers and graphics intensive users however, this may not be the right notebook for the job. The SZ sports a 128MB NVIDIA GeForce Go 7400 and scored a 12426 3Dmarks in 3Dmark 2001 and 750 3Dmarks in 3Dmark 2006. This was to be expected for the Go 7400 and while this notebook may well be able to run older, less graphics intensive games and programs, don't expect to jump on F.E.A.R. for a free-for-all frag-fest.

An interesting feature of this notebook is the hybrid graphics system which allows you so choose how you want to use the graphics capabilities of the SZ. If you are looking for performance you can allow the unit to consume more power to allow for increased performance or you can tell the unit to give you less performance in favour of a longer battery life.

The Sony Vaio SZ15GP/B is a great entry level unit for people who want to get mobile but don't need a monster laptop. However, for something that seems to be entry level, the price tag is somewhat inflated. At the same time, it is a Vaio notebook and sometimes you have to pay the price is you want a respected brand name notebook, despite performance and specs. The battery life was timed in Mobile Mark 2002 at 145 minutes which is fairly good and should be enough to watch the average DVD on the train.

The SZ also ships with a bevy of media creation software from adobe including Premiere and Photoshop. While these are not the latest versions of these programs, they are still quite powerful tools and work surprisingly well on this machine. There is also other software included such as Sonic Stage, PictureGear Studio, Digital Media Home and InterVideo WinDVD. If you need an entry level Multimedia creation tool, this laptop fits the bill nicely.