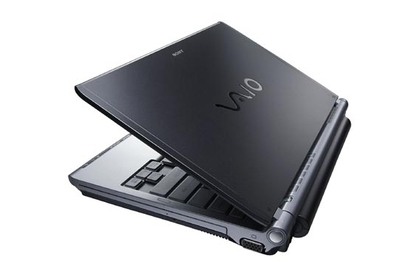 An ultralight tablet PC that is a little weak on character recognition, and too high on price.

Inside this tiny notebook is an Intel Pentium M Ultra Low Voltage processor running at 1.2GHz, along with 512MB of DDR2 RAM (upgradeable to 1.5GB) and an amazing four-millimetre thick 11.1in LCD screen. With a resolution of 1366x768, the screen shows amazing clarity. The fact that it is so thin does render it more vulnerable to torsion, which may affect its durability. However, we saw no adverse effects as a result of this during testing. The backlight is so powerful for this thin screen that there is a noticeable colour distortion along the bottom of the screen, but it is not of major concern.

Sony has even managed to include a DVD writer, making this an impressive, portable media unit. A note of caution: the drive is thin, and any really fast movement while the disc was spinning caused a grinding sound in our tests. The speakers sound great, the design is fantastic and this VAIO has plenty of power.