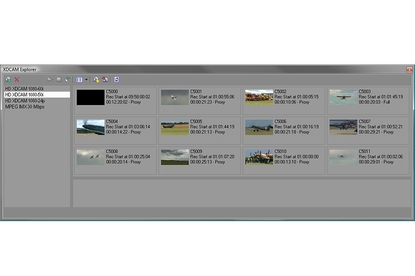 Sony's Vegas Pro video-editing software has a less-flashy reputation compared with competitors Apple Final Cut Pro 7 and Adobe Premiere Pro CS5, but this powerful application has its fans, too. The latest version, Sony Vegas Pro 10, gains some features that the other programs already had, but it also gains a few new functions that are unique, including stereoscopic-3D editing.

Stereoscopic-3D video editing means that you can use the software to produce 3D movies from 2D content (and, of course, to edit footage from 3D camcorders, once they finally come on the market) and play back the results on 3D televisions and PCs. In Vegas Pro 10, you enable stereoscopic mode with a menu command, and then make adjustments to the effect using a filter. I didn't try the results using 3D glasses and a 3D TV, but the old-fashioned cyan-and-red 3D setting (you can choose from among other settings) made the effect hard to miss, even without glasses. The feature has the same system requirements as high-def video editing does.

Another new feature, image stabilisation, works much like other packages' stabilisation features in that it analyses the video and reduces movement—even from reckless zooming in and out—by floating the video image in the frame and then cropping it. I found that the image stabilisation worked very well with the footage I tried it on—a movie I had shot on an old train while it was moving. You can set the feature to crop automatically, or you can adjust the settings manually; I had good luck even with the automatic setting.

Other new features aren't unique, but are still plenty useful. Like Adobe Premiere Pro, earlier versions of Vegas Pro had multicam support—the ability to play multiple video tracks at once, and to either click or use keyboard commands to make quick cuts between tracks to set which angle appears in the final movie. But Vegas Pro 10 goes one step further, adding a live preview. I found it very easy to use, and it produced a snappy, upbeat movie.

Another feature that has the potential to shake up the video-editing world is GPU-based acceleration. Adobe Premiere Pro CS5 introduced GPU acceleration, which speeds up certain functions and rendering using your computer's graphics card instead of its CPU, and now Vegas Pro 10 uses the graphics processor to accelerate its output to Sony's .avc format.

However, at this point that's all it does—it accelerates just that one function, and to one lone output format. By contrast, Premiere Pro CS5 uses the GPU to accelerate effects, timeline scrubbing, timeline rendering, and rendering to several output formats; it even separates effects into those that are GPU-friendly and those that are not. Furthermore, despite the fact that my PC has a supported graphics card, I saw no actual acceleration; the application relied on CPU power no matter what I did. So, to me, Vegas Pro 10's single-function acceleration isn't even worth touting on the box.

On the other hand, Vegas Pro 10 offers an extensive range of audio controls, far more than in Premiere Pro CS5 (mainly because Premiere Pro relies on a companion application, Soundbooth, to handle heavy-duty audio tasks). New capabilities in Vegas include the ability to add audio effects to the master output, to the bus level (going to external hardware), to individual audio tracks, or at the "event" (or clip) level. It even supports 24-bit/192KHz audio, very high-quality sound supported on Blu-ray Discs and in the moribund DVD Audio format.

Most of the time, Vegas Pro 10 operates smoothly and quickly; it feels perky and stable. That could be in part because it is a 64-bit application (which Vegas Pro has been since version 8), so it can take advantage of larger amounts of RAM. You can get it in a 32-bit version, though, that will run even on Windows XP. Final Cut Pro runs only on Macs, of course, and Premiere Pro CS5 is exclusively 64-bit on both Macs and Windows.

A new plug-in architecture—OpenFX—allows Vegas Pro to accept effects from third-party developers, and the application comes with many standard-looking effects. Sony says Vegas Pro 10 comes with more than 300 video and audio effects.

If you're eager to create 3D home videos for your 3D HDTV, Vegas Pro 10 is your only option at this point. Beyond that, it has many things going for it, but until Sony kicks that GPU-acceleration feature up a notch, Premiere Pro CS5 will continue to own the performance advantage.