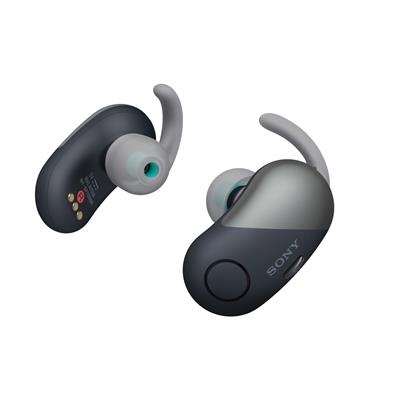 The Sony WF-SP700N sports earbuds take the strengths of last year’s WF-1000X and mold them to a very different cause.

As noted in our recent review of the Xperia Ear Duo, it’s difficult to think of any company - aside from maybe Jabra - that’s playing as deeply into the fast-growing true wireless earbuds space as Sony is. Between the experimental Ear Duo and last year’s WF-1000X, it’s clear that Sony are looking to cater to more than just that core customer looking to make the jump to true wireless. Thus far, Sony’s approach hasn’t been about offering one-size fits all true wireless products but instead opted for more-specialized fare.

With the WF-SP700N, that trend continues, with the company shifting their focus towards the fitness crowd.

Where to buy: Sony,

At a glance, Sony’s WF-SP700N look like a more friendly evolution of the form-factor found in the WF-1000X earbuds. Like the latter, they look like little mechanical beetles that you stick into your ears. However, that’s not to say there isn’t a contrast to be found here - it’s just in the details. The WF-SP700N are a more rounded on the corners and, across the board, a lot more ergonomic to actually wear.

Similar to Jabra’s Elite 65ts, you put them in your ears and then give them a firm twist to hook the plastic wings (attached to the earbuds) into the nooks and crannies of your ear canal. This can sometimes be a slightly awkward process but the end result is a set of true wireless earbuds that feel about as comfortable as these things get. When worn while running, it never felt like the SP700Ns were going to fall out and, even over longer use sessions, things remained pretty pleasant.

In terms of controls, there’s a set of touch-sensors on the outside of the earbuds do most of the work. These can be customized using the Sony Headphones Connect app for the WF-SP700N earbuds, which lets you toggle whether or not to allow ambient sound through and switch the earbuds between eight or so EQ settings. You can even use to app to configure the WF-SP700N earbuds to prioritize either sound quality or connection stability.

In terms of performance, I was pretty impressed with the WF-SP700N. Even if the noise-cancelling on these earbuds is a clear step below what Sony offer with their heavier-duty headphones, it’s still well above almost every other true wireless option out there.

Read more Sony A8F OLED TV Review: An OLED As Compelling As It Is Competitive

Of course, as with those other options, choosing the WF-SP700N is very much a case of choosing your compromises. There’s no true wireless earbud option out there that really has it all (except maybe the Zolo Liberty Plus). Still, if you’re looking for true wireless sports earbuds with noise-cancelling, these are pretty much your only option.

Fortunately, they’re a solid one - but that’s not to say that there isn’t room for improvement.

While the WF-SP700N offer IPX4 water and dust protection, there are other earbuds out there offering more comprehensive durability certifications. In addition, the actual isolation allowed by the physical design of the WF-SP700N also feels like it could use some work - as it sometimes interfered with the noise-cancellation experience.

Sony also continue to lag behind the competition when it comes to battery life. Even if it is 3 hours of noise-cancelling, 3 hours is still far too little compared to the competition.

As with the WF-1000X, the WF-SP700N also suffered from some minor connectivity issues in external environments. About 90% of the time, they worked without a hiccup. However, that rare 10% of the time, they’d drop in and out - adding a ruinitive choppiness to whatever you happened to be listening to at the time.

Buying into what Sony are selling with the the WF-SP700N is inevitably going to come down to personal preference but, if you do buy in, you’ll probably like what’s on offer here.

The Sony WF-SP700N sports earbuds take the strengths of last year’s WF-1000X and mold them to a very different cause. Even if this means that the WF-SP700Ns suffer from some of the same drawbacks, it does still set them up in a unique position that’s also competitive - primarily due to the rarity of noise-cancellation in the true wireless space.

That said, even when everything comes together, the WF-SP700N do still feel a little held-back by a handful first-gen hiccups. I really can’t wait to see what the second-generation of Sony’s true wireless hardware looks like - but if you can’t afford to wait, these are a strong, well-priced, option in the meantime.