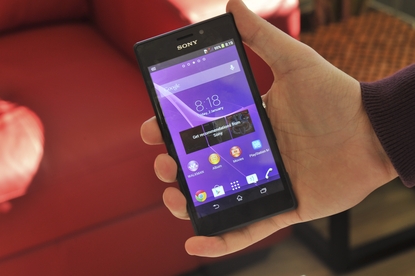 The Xperia M2 delivers an enjoyable experience. The software is versatile and the hardware, although modest, is powerful enough to keep the M2 competitive. Unfortunately it can't compete against its rivals at this price point. We’re afraid Sony has priced themselves out of contention — by about $100.

The Xperia M2 is Sony’s attempt at making some of its premium technologies available to the masses by slapping it with a budget price.

The Xperia M2 is instantly recognisable as a Sony smartphone. Much of its DNA is a carbon copy of Sony’s famed Xperia range, but the fine details that make company’s premium smartphones desirable is missing. Thick bezels make it look dated, and the screen does little to elevate the experience.

The screen stretches a 960x540 resolution over 4.8-inches, which ultimately gives the Xperia M2 a 229 pixel-per-inch density. At time the pixel grid will distract you, while the screen’s fondness of fingerprints takes the joy out of watching content.

Ultimately the display on the Xperia M2 falls behind that of Huawei’s Ascend G6, Motorola’s Moto G, HTC’s Desire 816 and LG’s Nexus 5.

Sony’s software is the big scoop on the Xperia M2, even if the smartphone ships with the now defunct Android 4.3 Jelly Bean. Years of refinement has benefitted Sony’s Android overlay, imbuing it with a healthy balance of intuitive design and granular controls. The Xperia M2 might not look like a flagship on the outside, but on the inside it sure runs like one — and that’s in spite of its modest hardware.

Sony’s software is the big scoop on the Xperia M2

Working behind the scenes is a 1.2GHz quad-core CPU, 1GB of RAM and 8GB of internal storage. Instructions are carried out quickly and rarely do you feel the smartphone is straining. Ideally more RAM would’ve suited the M2, even if it was like the Desire 816’s 1.5GB, but the included 1GB serves the smartphone well enough.

The smartphone has a non-removable 2300 milliamp-hour battery. Good Gear Guide used the smartphone to make phone calls, send text messages, surf the web, stream YouTube videos, watch movies and listen to music. Our testing revealed the smartphone would average a day of battery life, and it achieved these results without having its efficient ‘stamina mode’ enabled.

Sony is renowned for its imaging capabilities. Buying a Sony smartphone comes with the expectation that it will be able to take good photos and videos.

Sitting flushed on the rear of the Xperia M2 is an 8 megapixel camera and a single LED flash. Usually captured photos look better when viewed on a smartphone screen, but the low resolution screen of the Xperia M2 doesn’t do it any favours. Viewing photos on a large screen monitor or television serves the camera justice.

There are telltale signs this is a Sony camera. Landscape shots with the big blue sky or an evening sunset look great as the camera can discern fine gradations in colour, but the lack of an HDR mode means detail in shadowy foregrounds will be lost.

Lighting is paramount in getting quality photos with this camera. Photos taken in conditions where lighting is complex or poor will result in too much image noise, while photos with sun glare will wash out colour.

Videos recorded with the M2 are disappointing, even though the camera supports Full HD recording. Most videos will look grainy due to the large amount of image noise present. The fact the flash can’t be enabled/disabled while recording is another deal-breaker.

The Xperia M2 has a VGA front facing camera that records video in 480p resolution.

Sony currently recommends retailers sell the Xperia M2 for $399, and at that price the smartphone can’t compete with , Motorola’s $249 Moto G, HTC’s $399 Desire 816 and especially not LG’s $399 Nexus 5. Compared to these rivals, its screen, hardware and camera all prove inferior.

It’s a shame because the smartphone delivers an otherwise enjoyable experience. The software is versatile and the hardware, although modest, is powerful enough to keep the M2 competitive.

Put bluntly: the Xperia M2 can’t compete at this price point. We’re afraid Sony has priced themselves out of contention — by about $100.