The Sony Xperia Sola has a compact design, good build quality and NFC capabilities, but it's a little overpriced and the floating touch feature is currently little more than a gimmick.

Sony's Xperia Sola is a mid-range Android phone that follows the same design principles as the company's more expensive Xperia S. A compact frame, reasonable build quality and NFC capabilities are nice features, but the Xperia Sola is a little overpriced.

Compact design is a nice change, but...

The trend in the smartphone world seems to be moving toward huge screens, but at 3.7in the Xperia Sola appears to be resisting change. While the small screen is partly due to price point and mid-range market position, those looking for a compact smartphone should definitely take a look.

The Xperia Sola's compact design has both good and bad points. On one hand, the smaller size of this phone makes it easy to hold single-handedly. On the other hand, however, Sony's insistence on a sharp, square shape makes for some less than stellar ergonomics. The sharp corners of the Xperia Sola dig into your palm when holding the phone, particularly during one-handed use. We do like the soft plastic on the back, which has an almost rubber-like feel, along with the excellent power button and volume rocker. Build quality is reasonable, with little sign of poor craftsmanship. 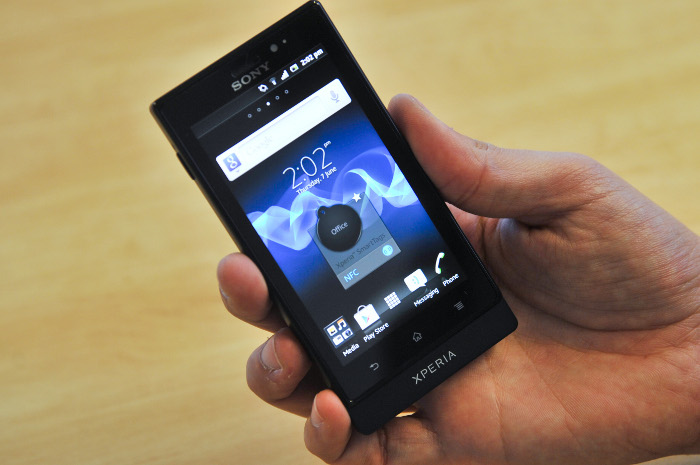 The Xperia Sola keeps the design consistency from Sony's other "NXT" series devices, resulting in a fairly attractive look. The phone has a thin, white LED notification light below the screen and in a unique touch, the display appears as though it's an individual element that sits on top of the base. Despite a removable rear cover, the Xperia Sola has a non-removable battery and uses a regular sized SIM card. Sony thoughtfully includes a micro SIM to SIM adapter in the sales package.

The Xperia Sola's 3.7in LED-backlit display uses Sony's Reality Display and Mobile Bravia engine technology, which claims to enhance sharpness, contrast and colour saturation of photos and videos while also minimising digital image noise. The screen has a resolution of 480x854 and a pixel density of 265 ppi, which is very reasonable for a display of this size.

Text is crisp and clear, though the small size of the screen means it needs to be zoomed in to a fairly high level to read without squinting. The display produces good colour and reasonable contrast, but it has poor viewing angles and is often hard to see in direct sunlight. A nice touch is the fact that Sony pre-installs a screen protector on the Xperia Sola from the factory. 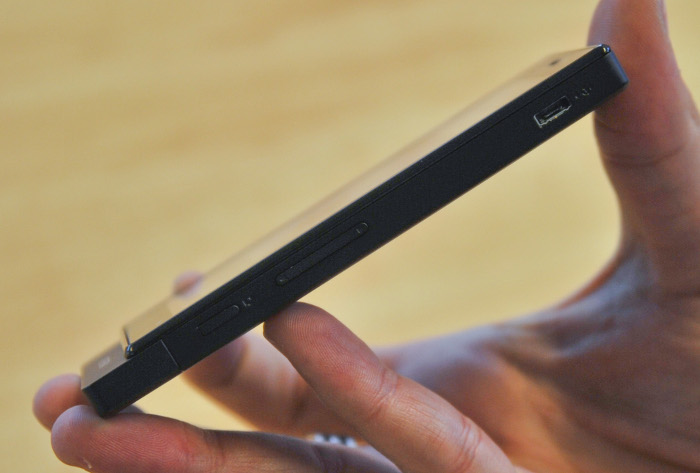 The Xperia Sola initially ships with the outdated 2.3 Gingerbread version of Google's Android software. Sony says the phone will be upgraded to the latest Android 4.0 Ice Cream Sandwich in the coming months, though it hasn't provided a firm date just yet. The Xperia Sola may not have cutting edge specifications, but we didn't experience too much lag or slowdown during general use. There is slight lag when swiping through home screens if they are populated full of widgets and scrolling sometimes isn't as smooth as we'd have liked, but these issues are likely to be resolved once Sony pushes out the ICS update.

The Xperia Sola is relatively pleasing to use, even with old software. Most of the bells and whistles from Sony's more expensive smartphones is here, including five home screens for live widgets, handy folders that enhance shortcuts and a main menu that can quickly arrange apps in various orders, including most used. The lockscreen is also a highlight as new messages and missed calls can be opened directly by swiping them. 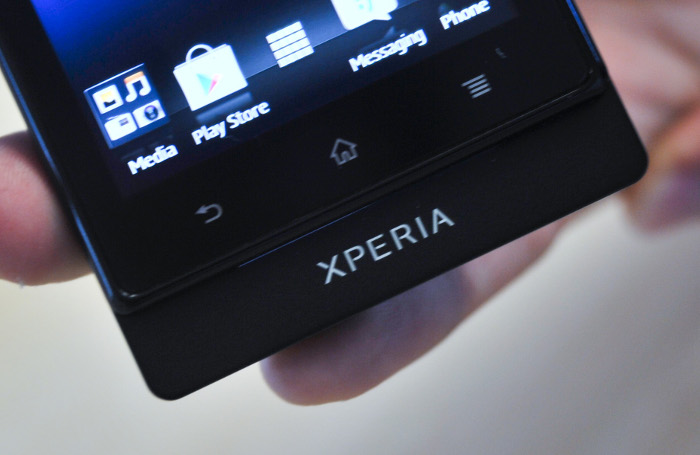 Due to the small size of the screen, the Xperia Sola's default, on-screen keyboard is cramped and a little difficult to type on. Sony's word correction software does quite a reasonable job at correcting spelling mistakes, but it isn't perfect. Like the Xperia S, the Xperia Sola's keyboard has Swype like functionality (called gesture input) that allows you to draw over letters in a single motion to type words. It's a good feature given the small screen, though it is switched off by default in the keyboard settings.

Sony's insistence on pre-loading the Xperia Sola with so many apps is a downside. A few of them are handy, such as OfficeSuite, a Stopwatch and the TrackID music recognition service, but many others, such as PlayNow and Sony's app recommender are worthless and can't be uninstalled or hidden in the app drawer. 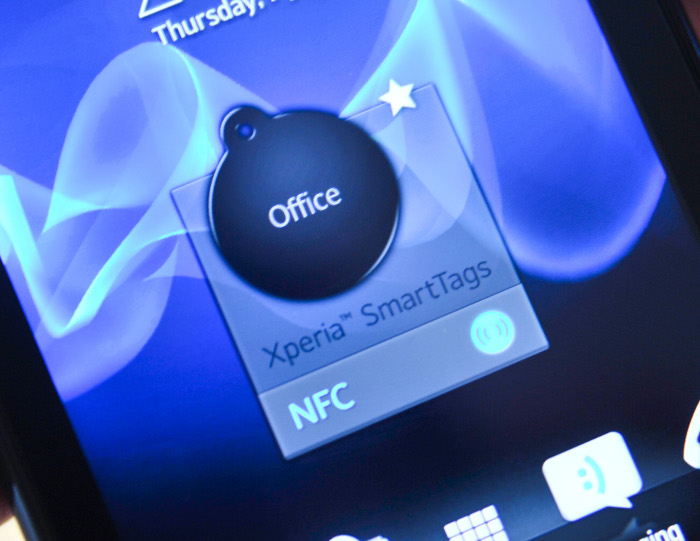 Despite both of these content services use the same log-in details, they remain separate apps. Sony really needs to work out a way to combine these services into a single app to make it easier and more effective to use on smartphones like the Xperia Sola.

Sony has made a big deal about a new feature called floating touch which allows you to hover your finger above (up to 20mm) the screen of the phone as if it was a moving cursor. This feature is an interesting idea but it can only be used to highlight links on a web page. You still need to tap the Xperia Sola's screen to select a link and the function only works in the Web browser. For now at least, this is little more than a gimmick.

The Sony Xperia Sola includes an NFC (Near Field Communications) chip and is therefore compatible with Xperia SmartTags. Two of these tags are included in the box and allow you to touch your phone against a tag can enable it to activate various settings. You can preconfigure the tags to activate a number of settings or toggle on and off certain functions. These could include turning your phone on silent when you get into the office, turning on Bluetooth when you get into your car, or launching a pre-selected app. The tags are a handy feature and a good example of infant NFC technology being put to notable real world use. 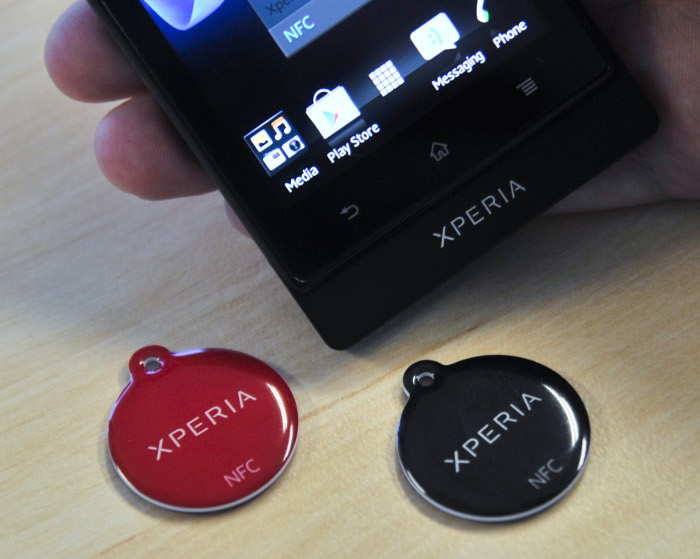 The Xperia Sola has a 5-megapixel camera but it still uses Sony's Exmor R image sensor found in higher end models. This claims to offer higher sensitivity and less image noise in low light areas than traditional mobile phone cameras. It does a decent job, but photos we captured suffered from too much image noise and shutter speeds are slow. The camera is severely hindered by a poorly designed camera button. It requires way too much force to press and often results in out of focus shots. Disappointingly, the Xperia Sola lacks a front facing camera.

Photos captured with the camera can be stored on the Xperia Sola's 8GB of internal memory, or the microSD card slot. Sony doesn't include a card in the sales package, so you'll need to purchase this separately. 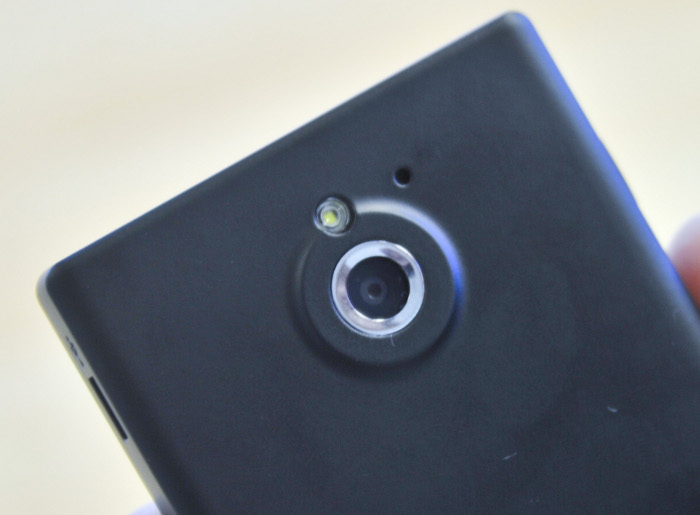 The Sony Xperia Sola has average battery life. We managed to push the unit to a full day of use on most occasions, though heavy users will likely need to recharge before the end of the day.

The Sony Xperia Sola is available now through retailer Harvey Norman for $486 outright.