The Sony ZS-S4iP combines an iPod dock with a boombox. 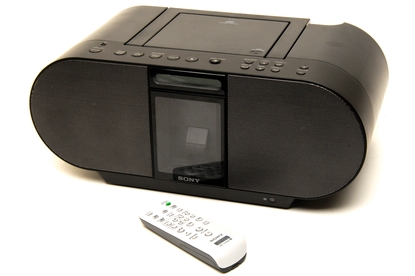 The Sony ZS-S4iP boombox and iPod dock has an AM/FM radio tuner and CD player built-in. Although the sound produced by the speakers suffers from distortion at high volumes and an occasional lack of bass, this boombox is a good choice given the price point.

The Sony ZS-S4iP is a two-speaker boombox with an iPod dock, a CD player and an AM/FM radio receiver. Although the audio quality is occasionally unimpressive, the ZS-S4iP's is well worth the price.

Boomboxes are usually rugged devices like the TEAC PCDV125L boombox designed to be filled with CDs or tuned to radio stations, boomboxes have lost their popularity as MP3 players such as iPods become more common.

The Sony ZS-S4iP boombox is a world away from that mould, with its easily scratched body and iPod dock. A window sits between two 2W speakers and is designed to frame the screen of the iPod touch or iPhone. It also protects a docked iPod from being damaged or dirtied when the boombox is moved around.

A CD tray sits on top of the boombox, while an AUX port allows a non-iPod MP3 player with a 3.5in jack to be connected. The AM/FM tuner lets you listen to your favourite radio station and the telescopic antenna tucks nicely into brackets to the rear of the device. Six C-sized batteries power the Sony ZS-S4iP when AC power is unavailable, and a carrying handle makes it easier to move the boombox around (it weighs 3kg without batteries).

The Sony ZS-S4iP's lack of a subwoofer also means that the bass has a tendency to be too light and lacking in depth. We played One of These Nights by Eagles, but the lower frequencies became slightly muddled with the mid-range — though this is to be expected from a portable music system at this price point.

Mega Bass can be used to boost lower frequencies. However, audio loses clarity and sounds muddled.

If you're after a modern boombox that you can use to play music from your iPod or CDs and listen to AM/FM radio bands, then the Sony ZS-S4iP is a versatile choice that won't break the bank.