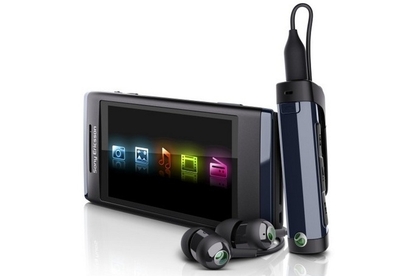 The Sony Ericsson Aino's ability to wirelessly connect a PS3 is a great feature, but the limited touch screen functions and its top heavy design diminish its wider appeal.

Boasting the ability to control and access multimedia content wirelessly from a PlayStation 3 console, Sony Ericsson's Aino mobile phone also features a 3-inch touch screen, Wi-Fi and an 8-megapixel camera. Unfortunately, a top heavy design, the touch screen’s a perplexing limitations and a frustrating implementation of the Remote Play feature make the Aino difficult to recommend.

Aesthetically, Sony Ericsson has certainly broken the norm when designing the Aino. We've long criticised the company for producing the same, dull-looking handsets when most competitors are innovating, and they've clearly listened to customer feedback — when closed the Aino looks sleek and stylish, and its long curved design is a hit with us. The large 3-inch touch screen takes up most of the front real estate, and a handy unlock button at the top of the phone unlocks the screen.

Unfortunately, first appearances aren't everything and sliding the Aino open is when things take a turn for the worse. The Aino's 3-inch touch screen means the phone is rather long when opened and the result in a top heavy design. To make things even worse, the Aino's keypad is positioned right at the base of the phone — when messaging, the weight at the top of the handset makes it feel as though it will easily topple out of your hands. The keypad is also rather small and the controls are awkwardly positioned and squashed together — specifically the selection buttons and shortcut and clear keys.

The biggest disappointment of the Sony Ericsson Aino’s design is that its 3-inch touch screen can only be used when the phone is closed. In this mode, the touch screen is used specifically to access the multimedia menu. You can use the camera, view photos and images, listen to music or the built-in FM radio and watch video files, but absurdly you can’t access the Web browser using the touch screen. The screen itself is responsive but the interface isn't very intuitive — it's not clear how to go back a level (you have to touch the top half of the screen where there are no icons) and the options are very limited. For example, you can listen to already created playlists but you can't edit them without sliding up into non-touchscreen mode, and you can only sort music by albums, not artist, genre, song or any other category.

Hooking up with a PlayStation 3 (PS3) games console is one of the highlight features of the Sony Ericsson Aino. Running through the myriad of options, settings and menu screens on both the PS3 and the Aino to get this feature up an running is a pain in the proverbial, but once the set-up was completed we were impressed with the results. The exact cross media bar (XMB) on the PS3 is displayed on the Aino when connected so it’s a familiar look and feel. Videos looked superb on the Aino's display and streaming can be done over Wi-Fi or 3G. The latter will certainly power through plenty of data and does take a while to load, so you've been warned.

PS3 streaming aside, the Sony Ericsson Aino is a fairly standard handset. An 8.1-megapixel camera with LED flash, built-in GPS, Wi-Fi and HSDPA capabilities are all included. The camera takes less than impressive photos and the LED flash isn't capable of providing enough light for decent low-light shots. Google Maps and the Wayfinder Navigator application are both included but the latter requires an extra subscription cost.

Sony Ericsson is generous with included accessories — the Aino comes packaged with a charging/synchronising dock that’s positioned at a good angle to watch videos, as well as an MH100 Bluetooth headphone adaptor. The latter allows you to use a standard set of headphones with A2DP Bluetooth. It is rather large but has a convenient shirt clip and its built in microphone means you can also take phone calls. Turning on the MH100 automatically pairs it with the Aino (provided Bluetooth is on), so it's easy to get connected. The bundled adapter still doesn't excuse the Aino's lack of 3.5mm headphone jack — sound quality over a wired connection is still better than over Bluetooth and you're stuck if you forget or lose the Bluetooth adapter.