The sleek, curved Vivaz smartphone represents a fresh look and feel for Sony Ericsson, but the drab Symbian OS is a big let down 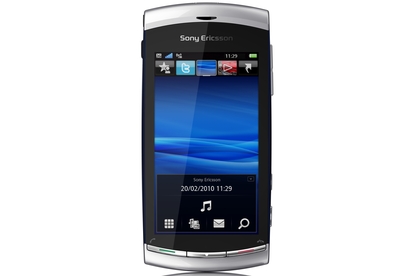 The Sony Ericsson Vivaz is a well designed smartphone with plenty of features, but it's ultimately let down by the drab and outdated Symbian operating system.

The second smartphone we've reviewed that records 720p HD video, Sony Ericsson's Vivaz sports a very stylish, curved design. This touch-screen smartphone has impressive hardware and is a delight to hold, but Sony Ericsson has again dropped the ball by opting for the buggy and outdated Symbian operating system.

We're a huge fan of the Sony Ericsson Vivaz's design: it is smaller than the iPhone but doesn't sacrifice too much screen real estate. The Vivaz slides effortlessly in and out of your pocket and feels well built despite the plastic casing. It's also one of the lightest smartphones on the market.

The Sony Ericsson Vivaz's 3.2in display is slightly smaller than the iPhone's, but it takes up virtually the entire front of the handset. The touch screen is resistive rather than capacitive, so it isn't as responsive as many competitors, including the Samsung HD Icon — which is also capable of recording 720p HD video. The Sony Ericsson Vivaz smartphone includes external volume controls, and dedicated camera and video recording buttons on the right side. The answer/end call keys and menu button below the display are awkwardly positioned and too thin.

The Sony Ericsson Vivaz features an 8.1-megapixel camera, and this is also used to record video. Like any camera phone, it won't replace a dedicated stills or video camera, but does a great job for a mobile phone. The Vivaz boasts continuous autofocus during video recording and excellent detail, putting it slightly ahead of the Samsung HD Icon. On the downside, video contrast could be improved and colours look slightly washed out. The single LED flash isn't good enough to snap still shots in dark conditions and the camera has no lens cover.

The Sony Ericsson Vivaz smartphone runs the Symbian S60T OS. The user experience is quite similar to the one offered by the Sony Ericsson Satio smartphone, the Vivaz's predecessor. Once again, five standby panels are accessible on the home screen by tapping the icons at the top, or simply sliding your finger across the display. You can access your favourite contacts, a Twitter feed, an image gallery and a customisable shortcut menu. The bottom of the main home screen also has four icons to access dialler, multimedia, messages and search functions, and these shortcuts are conveniently hidden when sliding through the panels.

The Vivaz's panels definitely add to the drab Symbian interface, but they don't do anything amazing. The Twitter feed is very basic and simply directs you to the browser when you want to read more than the last few Tweets, while the overall Symbian user experience once again lags behind competing interfaces. The Sony Ericsson Vivaz isn't particularly fast or smooth, has mediocre scrolling capabilities and its interface possesses annoying single and double click inconsistencies. There is also no dedicated Symbian app store, though our review unit came preloaded with handy YouTube and Facebook apps.

A 3.5mm headphone jack means the Sony Ericsson Vivaz is more suited to multimedia playback than its predecessor, though the positioning of the jack on the very top left of the handset is awkward to say the least. The tiered multimedia menu is similar to the PlayStation 3's interface and is accessible with one click from the home screen.

The Vivaz only comes with 75MB of internal memory, and Sony Ericsson includes an 8GB microSD card in the sales package. The phone can accept microSDHC up to 32GB in size. Unlike Samsung's HD Icon, the Vivaz can't play DivX or Xvid video files.

The Sony Ericsson Vivaz is an HSDPA-capable phone running on the 900MHz and 2100MHz bands, though Sony Ericsson should also release a version that will run on the 850MHz network band for use on Telstra's Next G network.

The Vivaz has assisted GPS, Bluetooth with A2DP and Wi-Fi connectivity. Its battery life is rated at more than five hours talk time and 440 hours standby time. We had to charge our review unit almost every night, especially when using the camera and multimedia functions regularly.