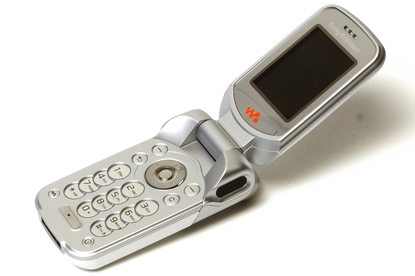 A solid walkman phone that is let down a little by its irritating keypad. If you need a small handset with great music playback this is a good choice.

With a small and almost toy-like design, Sony's latest walkman phone, the W300i, offers solid music playback capabilities and a speedy, colourful interface in a compact design. This phone is definitely targeted at a younger market, with a stylized and quite original look to it. We felt it could have offered a little more bang for your buck, and it suffers from a few keypad issues, but overall it is a pretty solid phone.

The most notable thing about this model is its music playback capabilities. As part of Sony's 'Walkman' series of phones, the W300i is designed to replace your digital music player. It does an admirable job. Music playback sounded rich and well balanced with a good mix of bass and treble. There is a five-band equalizer, shuffle and loop modes and the ability to sort by artist or title. Making playlists is also quite simple and can be done from the main Walkman interface. The W300i offers pretty much all the functionality of a stand-alone digital music player and won't disappoint users in this regard. As has become standard with Sony Ericsson walkman models, it uses earbuds with a proprietary connection, but also comes with a 3.5mm jack adapter, allowing you to use third party headphones; a great move on their part.

There is one notable omission for music playback however; A2DP support. A2DP is a protocol that allows you to stream stereo signals over Bluetooth. It is used by wireless Bluetooth headsets that are becoming more commonplace as hybrid hands-free kits and headphones. As a new release multimedia handset we'd expect A2DP support, even on a mid-range model. The unit does however support regular Bluetooth as well as infra-red and USB connectivity.

We were also a little confused as to why a walkman phone would only come with 20MB of internal memory. The price of flash memory is plummeting at the moment and we see no reason why manufacturers don't include more storage capacity on these multimedia phones. Sony does however rectify this to some degree, by including a 256MB Memorystick Micro (M2) card in the package. 256MB is enough for roughly three and a half hours of MP3 music and larger cards are available up to a 1GB capacity if that isn't enough. The card slot is stashed behind the battery cover, but thankfully not behind the battery itself, meaning you can remove it while leaving the phone on.

The W300i's design is quite interesting, and appears to be made to appeal to a younger audience. Our test unit came in pearly white with silver rims, but other colours are available. When flipped open it almost looks more like a toy than a multimedia mobile phone handset. The entire chassis is made from plastic, but feels quite solid.

It is quite a small phone, measuring just 90mm x 40mm x 24mm and apart from the jutting external aerial, it is barely noticeable in your pocket. Even when flipped open it is discrete and quite comfortable to hold. Its diminutive size does however cause a few problems, most notably with the keypad. It is quite cramped, with tiny, circular buttons that overlap with each other. We routinely had problems typing the wrong letter when messaging, so be warned if you have even slightly larger than normal hands, that this phone may cause you problems.

Aside from their size, the W300i's controls are fairly well done. They have gone with a simple navigation pad and two selection keys. There are also back and clear keys and a direct shortcut to the Walkman system (although this button barely measures 2mm in diameter and is extremely hard to press). We would have liked to see a Walkman shortcut key on the outside of the phone somewhere, enabling us to fire up our music instantly without navigating though the menu. There are some basic multimedia controls on the top left hand side of the outer case, including play/pause and track skip, but you need to have music playing before they become operational.

The W300i's 262,000 colour screen looks pretty good, although is a little dark for our liking. What is interesting to note is that its external screen is a simple monochrome red LCD, rather than a second colour screen. As this is a mid-range phone, the cost cutting is understandable, and although basic, the screen contains all the necessary information, including battery life, signal strength and time.

Further cost cutting appears to have been implemented on the camera, as the W300i comes sporting just a rudimentary VGA sensor. Capturing shots at a maximum resolution of 640x480, we found it virtually unusable for anything aside from taking wallpaper photographs. The shots were noisy, grainy and lacked any sort of real definition. Even by VGA camera standards they were below average. There are a few cool effects, including night mode, a four shot burst mode and some basic colour and framing options, but these aren't enough to make the camera application worth using.

We were impressed with the quality of the W300i's calls. Both incoming and outgoing audio was loud and clear. What was even more astonishing however was the battery life. The W300i has a massive 9 hours quoted talk time, and over 400 hours standby time. Most phones offer less than half these numbers, so if you're after a handset that only needs charging once every week, the W300i may be a good choice.