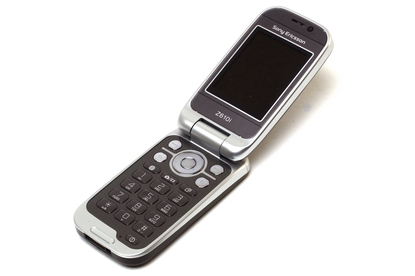 The Z610i is a handset that will appeal to those who want something extremely stylish, yet not without substance.

Sporting a glossy, mirror-like surface with a disappearing external display, the Sony Ericsson Z610i is a real head turner. While this handset will appeal to those who want something sleek and stylish, the 3G enabled Z610i also has quite a solid feature set to back it up. It offers a 2 megapixel camera, Memory Stick Micro (M2) expansion and MP3 playback support.

The outstanding feature of the clamshell Z610i is the external OLED display. Virtually invisible when not in operation due to the reflective, mirror surface, the display only appears when you receive a new message, call or calendar notification. We haven't seen this concept on a mobile phone we've reviewed before, although it is becoming more popular on digital music players, and were quite pleased with its effect, even if the surface is a fingerprint magnet. Our only complaint is with the screen's size; it's fairly small and could be brighter for a more vivid viewing experience. Unfortunately the brightness in the settings menu can't be adjusted.

Measuring 94mm x 49mm x 20mm and weighing just 110g the Z610i is very compact for a 3G handset and its sleek curves mean it slides easily into a pocket, purse or bag. After a train trip in our jeans pocket alongside a set of keys we found the surface held up well against scratches. Apart from attracting fingerprints, the phone is attractive; our review unit came in 'lustre black', but it is also available in 'airy blue' and 'rose pink' colour combinations.

Flipped open, the Z610i reveals a solid if not outstanding internal display and an excellent keyboard and controls. The display is fine for most uses, but we've seen other models with much brighter and crisper screens. Capable of producing up to 262k colours, the 176 x 220 TFT display didn't really wow us like its external brother and we felt it could have been a little larger as well. Where this model excels though is its keyboard. Possessing large, slightly raised and subtly rounded buttons, the Z610i's keyboard is excellent for pushing out long SMS messages and emails. The keys are easy to press and fairly responsive and this also extends to the controls. They are kept simple and effective, with a five-way navigational pad, two selection buttons, back and clear keys and dedicated web, camera and shortcut buttons.

A 2 megapixel camera is mounted on the front of the handset, although it does lack a flash and autofocus. Like most mobile phone cameras, it is best suited to an occasional snapshot rather than everyday use. The Z610i's camera includes a number of settings with 2.5x digital zoom, panorama, frames and burst shooting modes, a fairly ineffective night mode and a 10 second self-timer. Sony Ericsson has also offered a number of colour effects including negative, sepia and black and white. You can also adjust white balance settings with modes for auto, daylight, cloudy, fluorescent and incandescent available. The camera doubles as a video recorder with a microphone, but its performance is quite poor in this regard with excessive image noise and no real clarity. For video calling the Z610i features a VGA camera mounted above the display, although unlike many other 3G handsets you can't use this sensor to take portrait photos.

The Z610i isn't marketed as a Walkman phone, but it still includes a fairly competent music player, capable of playing a number of file formats including MP3 and AAC. Like the Walkman menu, the Z610i music player is grouped into an easy to use interface with menus for now playing, artists, tracks and playlists. There are basic play settings such as shuffle and loop and even a five-band preset equaliser. Unfortunately the MP3 capabilities are let down by the lack of a 3.5mm headphone jack or an adapter, so unless you have a pair of Bluetooth headphones you'll have to make do with the standard proprietary headphones. The Z61i supports A2DP (Advanced Audio Distribution Profile), which is a technology that let devices stream stereo sound to each other via Bluetooth, allowing music playback through Bluetooth headphones such as the Motorola HT820 Bluetooth Headphones.

Sony Ericsson has added is the ability to blog directly from the phone. In a couple of easy steps you can take a photo, write a small snippet of text and publish it on the Internet as a blog - all through the phone itself. You get your own free personal blog Web site with blogger.com when you purchase the Z610i and it only takes a minute or two to publish.

The Z610i includes just 16MB of internal memory but it supports Memory Stick Micro (M2). A 64MB M2 card is included in the sales package but if you require more storage, you can purchase cards up to a 2GB capacity. These new cards are much smaller than the popular Memory Stick Pro Duo - so be warned that they are very easy to lose. The M2 card slides into the left side of the handset, behind a well concealed rubber cover. Other connectivity options include Bluetooth and USB, but no infrared.

Sony Ericsson has also equipped the Z610i with a great list of PIM functions, including alarms, calendar, tasks, notes, calculator, timer, stopwatch and synchronisation with a PC. The PC Suite software is included in the sales package and is compatible with PCs running Windows 2000 or higher. The Z610i should also keep you entertained with Java games, video, photo and music DJ applications and a sound recorder.

According to Sony Ericsson's figures, the Z610i has a respectable battery life of seven hours talk time if you are using a 2.5G network. Unfortunately, this figure dramatically drops to just 2.5 hours when using a 3G network - certainly well below average. Its 400 hours of standby time is a little better, but not enough to make up for the poor talk time. This is quite disappointing, and unfortunately detracts from the overall appeal of the unit. On average, we charged our handset every two to three days while using a standard 2.5G network.