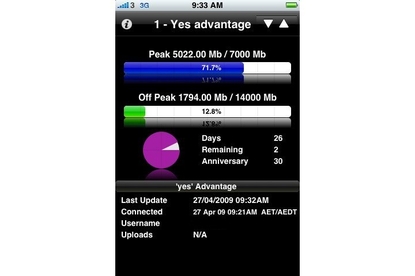 If you always find yourself in danger of going over your data or mobile cap, iiQuota will let you check your usage while on the move.

If you need to keep track of your mobile phone or broadband usage, the iiQuota iPhone app is a simple and attractive solution. Its $3.99 price tag is relatively high for an iPhone app, but it does support a range of providers.

You can use it to see how much you've downloaded with your mobile broadband modem, for example, or if you're about to get slugged with massive fees for too much Web browsing on your iPhone. It can also track how much credit you have left on your mobile plan; handy if you're worried about exceeding your cap.

Some developers might be attempting to change the world with groundbreaking iPhone apps, but iiQuota's goal is downright simple: track Internet and mobile phone usage. The application is simple and surprisingly elegant: two horizontal gauges provide peak and offpeak data/time usage data in a similar fashion to iTunes' familiar capacity gauges, while a small pie chart displays the remaining time in the given billing period. The dark motif doesn't entirely blend with the rest of the iPhone user interface but it is still attractive.

The current version of iiQuota supports seven mobile phone and broadband providers, including iiNet, Optus Broadband, Optus Mobile, BigPond, Telstra Mobile, Internode and Vodafone Mobile. The app's developer, SouthFreo Software, also promises support for TPG Mobile, TPG Broadband and Vodafone Prepay in a future version. We would have liked to see an even greater range of ISPs supported, but it is better than other current offerings in the App Store.

Conveniently, you aren't limited to viewing usage with a single provider. iiQuota allows you to have up to nine simultaneous user profiles with various service providers, and you can switch between them using two arrows at the top of the screen. One minor annoyance is that switching to an unconfigured profile automatically summons the user login screen and removes the navigation arrows. Though only a minor issue, it does force users to click twice in order to continue navigating.

Given that iiQuote does so little, there is little that can go wrong with it. Apart from one minor annoyance, iiQuota can easily become an irreplaceable tool for those who need to keep track of their Internet or mobile usage.